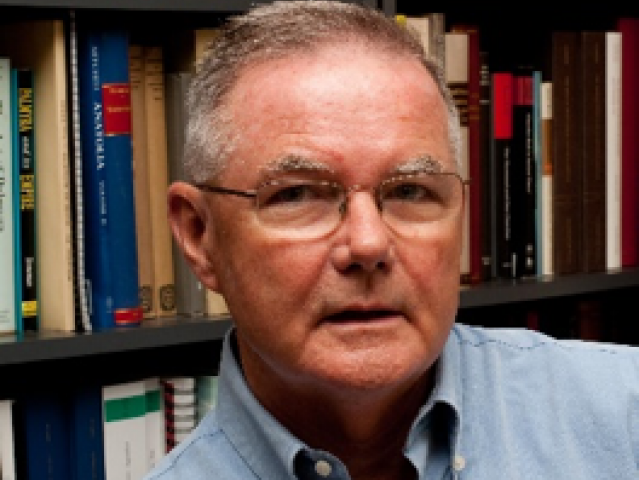 KARACHI: An Australian diplomat and academician has called upon the world to help restore the past glory of Aleppo, which is at the centre of the ongoing conflict in Syria.

Dr Ross Burns has authored numerous books on the history and archaeology of Syria and currently serves as an adjunct professor in the Ancient History Department at Macquarie University in Sydney. He was speaking at a session on ‘Aleppo: A City and its Architecture’ held on Wednesday at Aga Khan University under its special lecture series.

The former ambassador to Syria raised a question on Aleppo’s involvement in the ongoing ‘civil war.’ “It was safe for the first 15 months but became a hotly contested zone as two counter-siege operations took place and the rebels got hold of the Citadel and other historic buildings in the South, compromising the regime’s access to the city,” he said, adding that the most damage was done in the central part of the old city under rebel control.

Aleppo, Dr Burns continued, was known as the City of Legends to the outside world with a diverse population, highly dependent on trade as it was located on the western part of the Silk Route. Dr Burns also stated that it is the only Middle Eastern city mentioned in the works of Shakespeare, that too twice; once in Macbeth and, more famously, in Othello’s final speech before his death.

Talking about the Citadel of Aleppo, a United Nations Educational, Scientific and Cultural Organisation World Heritage Site since 1986, he said it was built in the third century BCE. Dr Burns shared that most civilian settlements in the old city were around the Citadel, which had been occupied by the Greeks, the Byzantines, the Ayyubids and the Mamluks over the years. He hailed the Aga Khan Trust for Culture for their restoration efforts up until the breakout of the ongoing ‘civil war’ in 2011.

Another historic architectural structure touched upon in the lecture was the ceremonial plaza in the south of the Citadel, built in the time of the Ayyubids (1176-1260). Dr Burns mentioned that this was where the local population gathered for celebrations and where the sultan would also hear cases and dispense justice. He said while the surrounding area was not historically important, there were beautiful ancient structures that have now been blown to smithereens due to tunnel bombings.

In conclusion, Dr Burns said, “With my writing I am trying to debunk the theory that Aleppo is destroyed. I can think of no better gesture than to restore the everyday life for the people of Aleppo,” he added.

In pictures: Aleppo before and after the war

The session was organised in collaboration with the Institute of Architects of Pakistan, Karachi Chapter. The Australian High Commissioner to Pakistan, Margaret Adamson, was also in attendance and appreciated the collaborative effort of the organisers, saying that Dr Burns must pay a visit to many a cultural site in Karachi as well as other parts of Sindh.