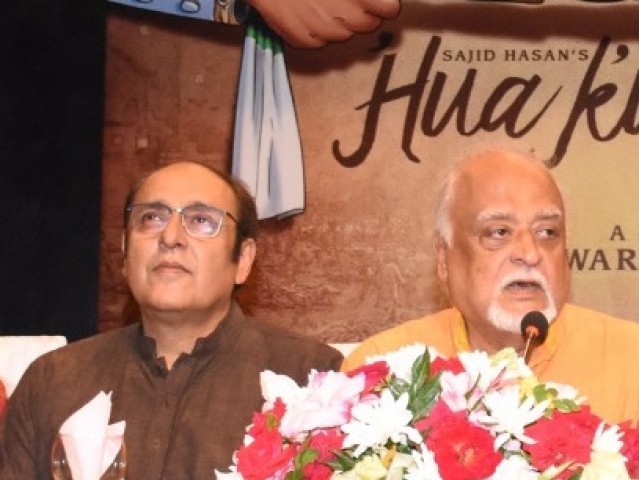 KARACHI / SAJID HASAN / ANWAR MAQSOOD: As previously reported, the man behind Anwar Maqsood’s most acclaimed theatre play in the recent years Siachen, Dawar Mehmood is set to return with a new play titled Hua Kuch Yoon, starting November 22. The play will tour seven cities, starting Peshawar and then ending up in Karachi by March next year. This time around though, the play is penned by actor Sajid Hasan. 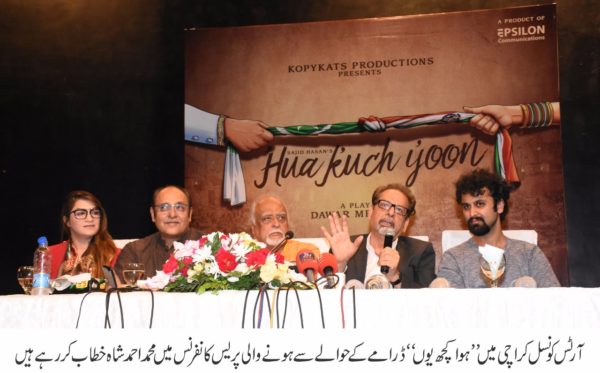 Maqsood, Hasan and Mehmood held a press conference on October 24 at the Karachi Arts Council to talk about the play. Maqsood started off by recollecting how the young director and he got to work together. “Several years ago, a few kids came to me. First, I thought shayad chanda maangne aaye hain (maybe they had come asking for donation).

“They said we remember your Aangan Terha. They gave me a deadline of three days. And that’s how our partnership started, and I wrote Pawnay 14 August.”

Since then, Maqsood has collaborated with KopyKats Productions on several plays, except Bananistan. For the latest play, Maqsood was critical of the title. “Dawar named it Hua Kuch Yoon. I mean, if he had asked me, I’d have named the play, Mujhe Kyun Nikala’,” he quipped. Yet he praised Mehmood calling him ‘the most talented director in the country’.

Hua Kuch Yoon is a love story set in pre and post-Partition era with the story spanning over 80 years. Hasan said it was impossible to get something written by Maqsood. 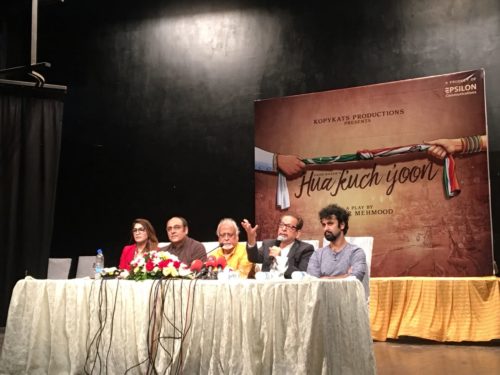 “But while it took him four days to write Pawnay 14 August, it took me two years to write Hua Kuch Yoon,” he said. “I even contemplated suicide. I used to think writing wasn’t difficult,” confessed Sajid.

He put over theatre as one of the most important creative forms in the country. “If theatre is strong, it helps all the other creative industries of Pakistan as well,” he said.

“It was almost impossible to bring the theatre culture back, but people came because of Anwar Maqsood. It’s because of his name and value that we could revive the culture again, so a lot of credit goes to him,” asserted Sajid.

Drawing a very interesting comparison with the film-maker and writer Woody Allen (who has delivered classics such as Annie Hall, Manhattan and Hannah and Her Sisters), Hasan said, “I consider Anwar Maqsood a bigger and better writer than Woody Allen.”

Even Arts Council president Ahmed Shah commended Maqsood for bringing the audience back. Further, he announced that a new theatre hall is being constructed and will be open in a few months. “It will be dedicated to Fatima Surayya Bajia,” he confirmed.

Back to talking about the play, director Mehmood compared his discussions during the writing process as a “boxing match”. He said, “The best part about working with Sajid Hasan was his attention to detail. If you want to make him write, you have to convince him logically and bring him facts.”

He shared that the play will have nine to ten set changes. “It’s a challenge keeping the audience engaged in the story while changing the set that many times in the span of an hour-and-a-half.”

Moreover, he also talked about how powerful Maqsood’s plays are, saying, “No matter the delivery of the actors, his lines are so impactful that whether if they’re performed by a mediocre, average or a great actor, the audience response is the same.” 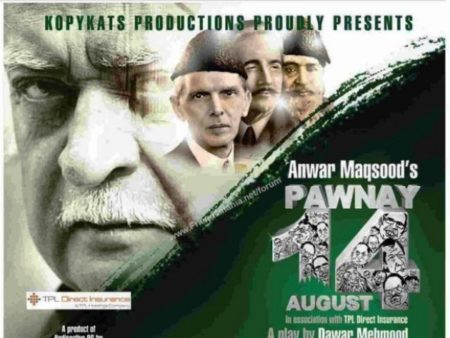 During the question-and-answer session, Maqsood was asked about having written a film with Asim Jofa. “Yes, I have written a film with Jofa but he’s a businessman, so he left with saying yes or no. Now Sarmad Khoosat will be on board to direct the project,” he said, adding that Jofa will still be part of the film, which is about a young sarangi player known as ‘Nawab Sahab’.