Tillerson is acting like a Viceroy, says Senate chairman

Tillerson is acting like a Viceroy, says Senate chairman 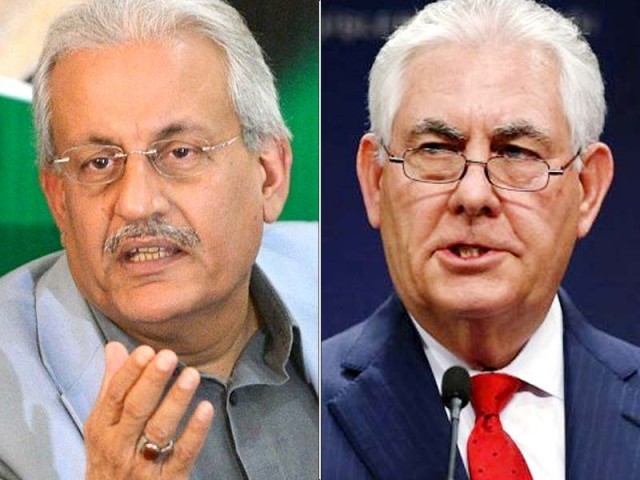 ISLAMABAD: The Senate on Tuesday summoned Foreign Minister Khawaja Asif to brief the House on Wednesday (today) about US Secretary of State Rex Tillerson’s recent statement in which he warned Pakistan to move against the Taliban and other groups inside the country or face consequences.

Senate Chairman Raza Rabbani remarked that the tone and tenor of Tillerson was not acceptable to Parliament of Pakistan. “He is acting like a viceroy,” Rabbani said of Tillerson, adding that Asif should go through August 30th recommendations of the Senate regarding how to move forward in relationship with the US.

Tillerson, while speaking at a press conference in Kabul on Monday after meetings with Afghan President Ashraf Ghani and Chief Executive Abdullah Abdullah, said that during his sojourn to Islamabad he would reinforce President Donald Trump administration’s demand to move against the Taliban and other extremists based inside its borders or face the consequences.

Tillerson arrived on a daylong visit to Islamabad on Tuesday. While he was in meetings with Pakistani civil and military leadership during his daylong visit, the Senate was castigating his remarks in Kabul.

Taking strong exception to his statement, the Senate chairman said the US Secretary of State talks about certain conditions being placed on Pakistan. “The foreign minister should come to the Senate and explain what these conditions were,” he said, addressing Law Minister Zahid Hamid.

Rabbani said soon after the US administration unveiled its future policy on Afghanistan, the Senate of Pakistan on August 30th approved the policy guidelines on how to move forward with regard to Islamabad’s relations with Washington.

“One of the recommendations was to call a joint sitting of parliament to get the Senate policy guidelines ratified. The government is yet to convene this session,” he said.

As the session continued, the chairman received a written intimation from the foreign minister that he would not be available to attend the Tuesday’s session. This irked Rabbani. “Parliament should be taken into confidence. What can be more important than coming to parliament,” he said.

Rabbani asked the law minister to clarify a ‘misleading and incorrect’ statement from the Attorney General for Pakistan to the Supreme Court that the Senate was reluctant to pass the National Accountability Ordinance (NAO), 2017.

Rabbani noted that the bill was presented before the Senate and it was referred to the relevant standing committee for consideration, which reported back on April 11, 2016 with recommendation to pass the bill.

“There is no delay on the part of the Senate. It is the government which is yet to bring the bill on the agenda of the day [because] it is a government bill. The Senate must not be blamed for the delay,” he added.

Law Minister Hamid accepted that it was not the fault of the Senate. He said there were some issues, especially with regard to striking down the plea-bargain clause in the ordinance, which led to the delay.

The House passed the Public Interest Disclosures Bill, 2017, which has already been passed by the National Assembly on August 25. The bill aims to giving legal protection to whistle-blowers who disclose information relating to economic crimes.

The law minister said that international conventions relating to corruption have also recognised the importance of having a law in place for the protection of persons making public interest disclosures as an effective anti-corruption mechanism.

In blue berets or green, Pakistani soldiers fight with honour