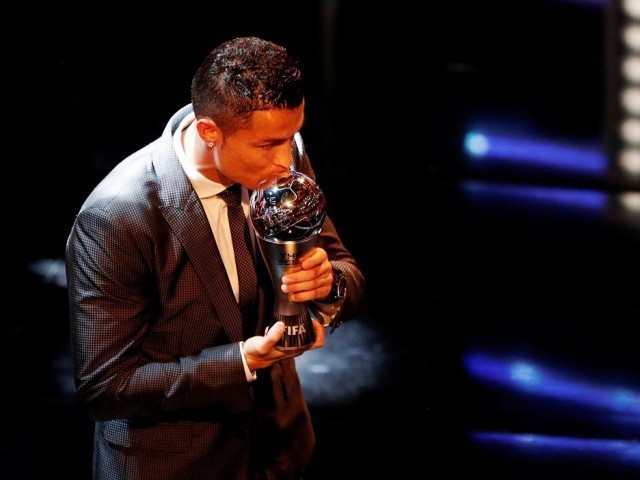 LONDON: Cristiano Ronaldo has set his sights on a “lucky seventh” piece of FIFA silverware after collecting his fifth Men’s Player of the Year award on Monday.

Ronaldo’s Real Madrid side, who won both La Liga and the Champions League last season, dominated the 2017 Best FIFA football awards at a star-studded ceremony in London on Monday.

The Portuguese ace has scored 44 goals in just 48 games for club and country so far this calendar year, including two in a 4-1 Champions League final win over Juventus in Cardiff on June 3.

Ronaldo is ‘The Best’, insists Zidane

But, typical of a footballer who has enjoyed huge success at both Manchester United and Real, Ronaldo was not satisfied.

“I want seven. Five is good but seven is my lucky number so seven would be great.”

Real boss Zinedine Zidane took the corresponding manager of the year award, with the Spanish giants providing five players in the FIFPro team of the year.

Ronaldo won the inaugural Best FIFA men’s player of the year award last year following the end of a six-year merger between the FIFA honour and France Football’s Ballon D’Or.

The 32-year-old previously won the FIFA World Player of the Year award, the precursor to the Best FIFA award, in 2008.

He has now won the last two FIFA men’s trophies as well as three of the last four Ballon D’Or awards.

“Thanks a lot for voting for me,” said Ronaldo after receiving his trophy from Argentina great Diego Maradona and Brazil’s Ronaldo at the London Palladium theatre. “I mention Leo and Neymar, great to be here. Real Madrid supporters, my teammates, my coach, they all support me all year. We are in England for the first time and I win consecutive awards. This is a great moment for me. I have fans all over the world.”

Zidane won out ahead of Chelsea’s Antonio Conte and Juventus’s Massimiliano Allegri to be crowned men’s coach of the year after becoming the first man to oversee a successful defence of the European Cup in the Champions League era.

“I’d like to thank all of the players for making this possible,” said Zidane. “This is a very special prize.”

AC Milan’s Leonardo Bonucci and PSG’s Dani Alves were in the defence, with Barcelona playmaker Andres Iniesta in a side also featuring Messi and Neymar.

Juventus and Italy shot-stopper Buffon topped a three-strong shortlist for the goalkeeper award ahead of Real’s Keylor Navas and Bayern Munich’s Manuel Neuer.

Monday also saw the Puskas Award for the best goal of 2017 go to Arsenal’s Olivier Giroud.

The France striker received the award named in honour of Hungary great Ferenc Puskas for a spectacular ‘scorpion-kick’ against Crystal Palace in January.

The Frenchman’s flicked volley with his left foot that went in off the crossbar won ahead of goals from Venezuela’s Deyna Castellanos, 18, and South African goalkeeper Oscarine Masuluke.

Meanwhile tournament hosts the Netherlands’ achievement in winning their first major female football title, the 2017 Women’s European Championship, was recognised with Women’s Coach of the Year and Player of the Year awards for Sarina Wiegman and Lieke Martens respectively.

Supporters of Celtic won the Fan Award for the way they marked the 50th anniversary of the Glasgow club’s European Cup triumph.

The Fair Play award went to Francis Kone for saving the life of goalkeeper Martin Berkovec, who nearly suffocated as a result of swallowing his tongue during a Czech league match in February.

Voting for the bulk of the awards was equally weighted between national team captains and coaches, media and fans.