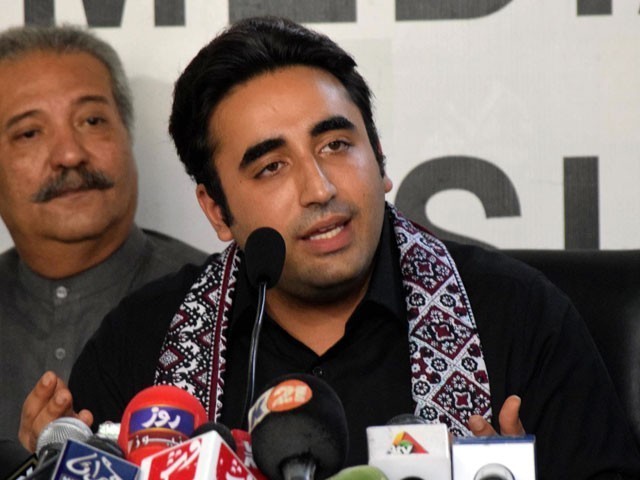 HYDERABAD: Pakistan Peoples Party Chairman Bilawal Bhutto Zardari believes the indictment of disqualified prime minister Nawaz Sharif and his family in the accountability court in Islamabad will entail no repercussions for democracy.

“The indictment will neither weaken democracy nor it is a conspiracy against democracy,” declared Bilawal while talking to media-persons at the inauguration of a government cardiac hospital in Tando Muhammad Khan on Thursday. He also attended Diwali celebration of the Hindu community.

“Accountability is necessary for strong democracy,” he added.

Although a reaction to the indictment was supposed to have more relevance, he spared most of his criticism for Pakistan Tehreek-e-Insaf’s chief Imran Khan.

He predicted that Khan will end up as another Asghar Khan (former air marshal and founder of Tehreek-e-Istaqlal), who failed to secure any seats during the 1970 parliamentary elections.

“His future is not the prime minister,” said Bilawal.

Bilawal said, “PPP has a principled disagreement with Khan, who attacked democracy through his sit-in in Islamabad and supported referendum of Gen (retd) Pervez Musharraf, who killed former prime minister Benazir Bhutto and Akbar Bugti.”

He blamed Khan for practically opposing women rights in contradiction to his party’s declared stance. The PPP leader claimed the PTI chief opposed the PPP’s 2002 bill in the National Assembly which was tabled for women empowerment through legislation. “He supported [late chief of Inter Services Intelligence] Hameed Gul for removal of Benazir Bhutto’s government [in 1996].”

Bilawal reiterated the corruption allegations levelled by some elected representatives of the PTI in Khyber-Pakhtunkhwa against Khan and Jehangir Tareen. He said one of the PTI’s founding members has accused the party of receiving foreign funding, including from India and Israel.

Inaugurating the National Institute of Cardio Vascular Diseases’ (NICVD) satellite centre in Tando Muhammad Khan’s Shaheed Benazir Bhutto Cardiac Care Hospital, Bilawal assured that the people will get free medical treatment without discrimination or privilege. “It is my dream to provide health services to all Pakistanis so that no person may die due to non-availability of medical treatment.”

He promised to establishment a second centre of NICVD outside Karachi.

“It is the fruition of the PPP’s services for the people that even after the passage of five decades [since the party was founded by Zulfiqar Ali Bhutto] we still live in the people’s hearts.”

Later, speaking to the Hindu community, the PPP’s chairman said the Sindh Assembly passed the Hindu Marriage Bill to regulate marriages but the Sindh governor did not sign the bill.

He said the PPP considered all Pakistanis as equal citizens, adding that the Sindh cabinet as well as the party’s elected legislators included non-Muslims.

Responding to a media query about the prospects of him becoming the prime minister, Bilawal said a constitutional amendment is not required for his election to the office. “If one can be elected a member of the National Assembly, he can also be elected as the PM.”