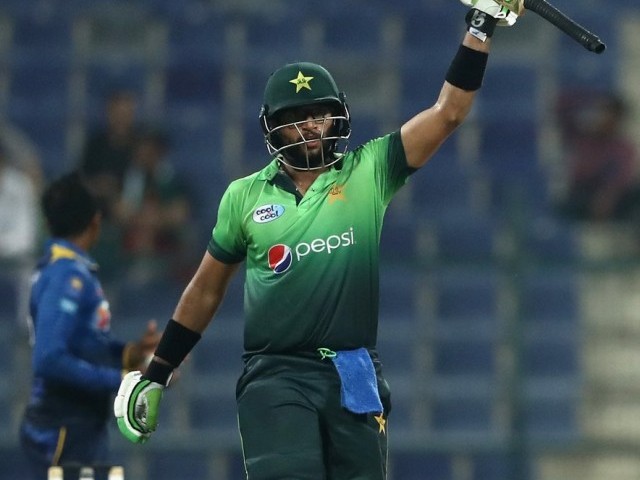 KARACHI: Left-handed opener Imamul Haq silenced his critics on Wednesday after he scored a century on his debut to help Pakistan ease past the target of 209 runs with seven wickets remaining, and left-arm pacer Sohail Tanvir rates it as a dream start to international cricket.

Imam, the nephew of National Selection Committee head Inzamamul Haq, was asked to fill in for right-handed opener Azhar Ali, who was rested for the Sri Lanka ODIs.

And when Imam got his chance on Wednesday in the third ODI, replacing Ahmed Shehzad at the top, he made sure his five boundaries and two sixes helped him reach the 100-run mark.

“A sportsman’s answer to his critics is to deliver on the pitch and that is what Imam did,” Tanvir told The Express Tribune. “He made his critics praise him.”

Tanvir believes Imam handled himself really well on his debut. “A player is under a lot of pressure in his debut match,” he said. “All his efforts are focused towards doing well in the debut match and the way Imam held his nerves was great.”

Sohail, who made his ODI debut against South Africa and was asked to bowl the first over, said a team’s trust in its player’s ability is greatly tested on one’s debut.

“Getting a chance to lead the bowling attack is one of the luckiest things and it shows how much the team trusts you. At the same time, you are burdened with the responsibility to do well. I gave three runs in my first over on my debut, and Imam too made an outstanding effort and scored a century,” he said.

Tanvir said Imam was supported well by his batting partners. “Imam had luck on his side and he was well supported by his teammates,” he explained. “Fakhar, Shehzad, Faheem Ashraf and Usman Shinwari, they all play for the same department in domestic cricket. Playing with cricketers you play throughout the year with helps build better coordination on the field. The way Fakhar and Imam opened for Pakistan was incredible, but in the end it was Imam’s talent which helped him.”

‘Hasan is a consistent performer’

Hasan, who bagged a five-for in the third ODI to demolish Sri Lanka batting and became the fastest Pakistani to 50 ODI wickets, was also praised by Tanvir for his consistency.

Sohail concluded that Hasan has a chance to concentrate more on developing his game since he wouldn’t have to worry about his place in the team.

“The appreciation raises the morale of the player and pushes him to aim for more,” he said. “Now, after so many great performances, he has to concentrate on improving his game further rather than worrying about his place in the team. He is a wicket-taker and also restricts other teams from scoring runs. He is being used in the best possible way by captain Sarfraz Ahmed and will help Pakistan whitewash Sri Lanka.”

Amir calls himself a ‘fan’ of Kohli