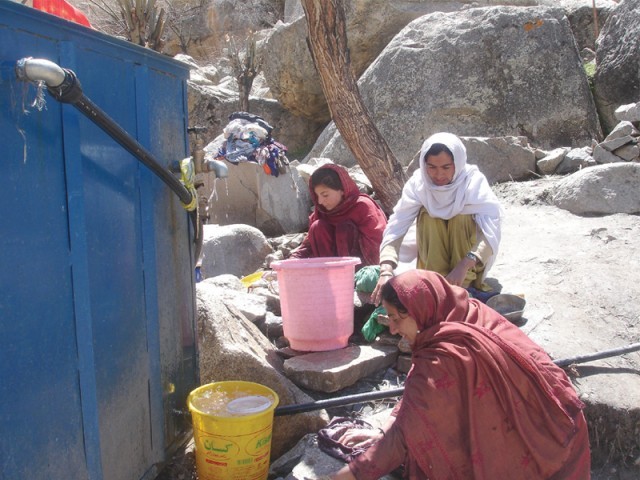 Drudgery to make both ends meet reduced one chilly morning for Khanza Begum, 31, mother of four, as she found hot water to wash clothes at zero degrees centigrade and electricity in the evening for knitting and sewing.

When the demand for energy drops, water is shifted to a large barrel through an electronic load-control device. “Before December 2010, I used to collect wood from the jungle, make a fire and boil water to wash clothes,” said Khanza Begum.

The clean energy generation is also earning dollars for the area, as against each unit produced, the project wins $1.3 dollar under the Clean Development Mechanism initiative to reduce carbon omissions.

The villagers are planning to convert the washing barrel into a Small and Medium Enterprise aimed at sustaining progress that has made life easier for poor women.

“The time saved from collecting wood is now being used for other productive activities like knitting and sewing, which has improved our lifestyle”, said Bibi Zar.

The project is funded by the Pakistan Poverty Alleviation Fund, but is being maintained by the villagers. The Wahat micro power plant is one of 63 micro hydel projects that have been installed on the banks of the Chitral River, enabling at least 24,000 households in the district to have access to electricity, said Fazl-e-Rabi, Manager Renewable Energy of the Aga Khan Rural Support Programme – the organisation executing the project.  This figure is double the number of households linked with the national grid. The hydel electricity costs Rs2 per unit to domestic consumers against the Water and Power Development Authority’s Rs8 per unit.

These small achievements may make the communities proud, but a lot more needs to be done. The area is gifted with hot springs. An official from the Aga Khan Rural Support Programme said a local prince, who owns the mountain from where the water flows, does not let water be used for commercial purposes. He said the prince has rejected a proposal to use the water for a central heating system that will promote tourism in the area.

National Assembly: After bickering, lawmakers make up to defend democracy