Mullen's visit to Afghan­istan and Pakist­an comes as the US enters a delica­te phase of the nearly 10-year-old war.
By Reuters
Published: April 20, 2011
Tweet Email 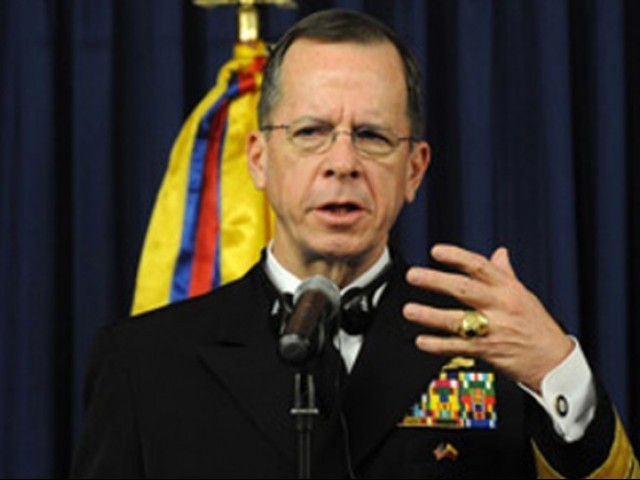 Admiral Mike Mullen, chairman of the US military's Joint Chiefs of Staff, made the comments before a trip to Islamabad. PHOTO: AFP/FILE

FORWARD OPERATING BASE SALERNO, AFGHANISTAN: US and Pakistani leaders agree they cannot afford to let security ties unravel, the top US military officer said on Tuesday, even as he acknowledged persistent strains including US claims of Pakistani links to insurgents staging attacks in Afghanistan.

Admiral Mike Mullen, chairman of the US military’s Joint Chiefs of Staff, made the comments before a trip to Islamabad as he visited US bases in Afghanistan that are grappling with violence by insurgents coming over the border from Pakistan.

Washington has long accused elements of Pakistan’s Inter-Services Intelligence (ISI) of maintaining ties with the Haqqani network, an issue that Mullen said he would again raise in talks on Wednesday with Pakistan’s army chief, General Ashfaq Kayani.

“We’re working our way through the relationships that the ISI has with the Haqqani network and the strain that that creates,” Mullen said, even as he cited battlefield gains reducing the group’s mobility.

“I’ll see General Kayani here shortly and these are issues I address with him every single time we engage. And I certainly intend to (raise that) this week.”

Pakistan has long demanded a say in any peace settlement in Afghanistan.

But the Haqqani network is only one of the irritants in the US-Pakistan relationship, along with Pakistani concerns over US drone attacks and espionage that have dominated headlines recently and intensified anti-American sentiment there.

Pakistan is also seeking a cut in the number of US Special Forces trainers working in sensitive regions, an issue raised by the ISI chief, Lieutenant-General Ahmad Shuja Pasha, at talks at CIA headquarters last week.

“I think that all of us believe that we cannot afford to let this relationship come apart,” Mullen said, referring to US and Pakistani military and intelligence chiefs.

He acknowledged that the relationship was difficult, but added: “We walk away from it at our peril, quite frankly.”

Asked about Pakistani demands to trim the number of US military trainers, who Pakistan fears could be involved in covert action, Mullen said he still saw continued US training support in the future. He did not offer specifics and said the matter still needed to be ironed out.

Mullen’s visit to Afghanistan and Pakistan comes as the United States enters a delicate phase of the unpopular, nearly 10-year-old war. US officials are preparing plans to start withdrawing troops in July, with the goal of handing lead security responsibility to Afghan forces by the end of 2014.

But they are also bracing for heavy fighting ahead.

“I’ve been very straight with the American people with respect to that. I think our losses which were significant last year will be this year as well,” Mullen said.

“That said, the Taliban had a really tough year last year. They’re going to have a tougher one this year.”

US commanders in Afghanistan cited increased cooperation at a tactical level on both sides of the Afghan-Pakistan border.

They also acknowledge violence that has reached inside the bases visited by Mullen.

At Forward Operating Base Salerno, one of Mullen’s stops on Tuesday, a 26-year-old soldier was killed on April 3 by an insurgent rocket fired into the heavily fortified compound in Khost province, just 13 miles from the Pakistan border.

Mullen also visited the nearby US forward operating base that was targeted by a suicide bomber in December 2009, killing seven CIA employees.