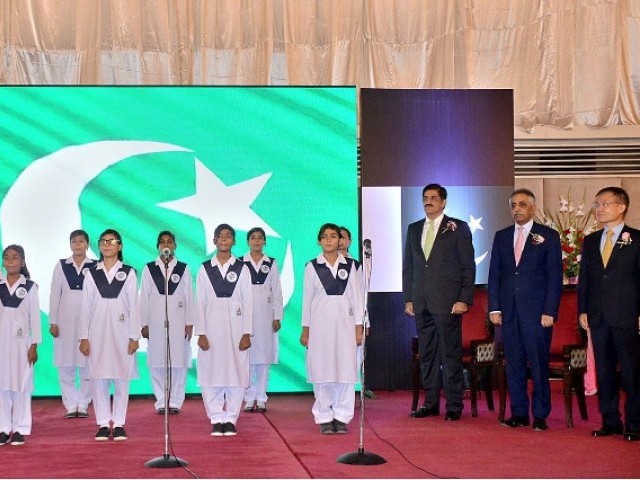 Speaking at an event marking Korean National Foundation Day, the diplomat said that Pakistan and the Republic of Korea have signed a $500 million development framework under which Seoul would provide $500 million to Pakistan to meet its development programmes pertaining to different projects, including hydropower, road infrastructure, improvement of power distribution system, information technology and health sector.

Originally Korean National Foundation Day is celebrated on October 3, to mark the nation’s founding in 2,333 BC, also known as Gaecheonjeol in Korean language.

According to legend, Gaecheonjeol is when the skies opened and Korean ancestors descended upon the Earth to establish the first Korean state. Interestingly, if we follow the legend then this year would be the country’s 4,350th national foundation day.

The consul-general said that bilateral trade between the two countries is currently worth about $1.1 billion, adding that they wish to further grow as trading partners and strengthen the 34 year-long diplomatic relationship between Pakistan and the Republic of Korea.

“Since the establishment of diplomatic relations in 1973, Pakistan and South Korea have maintained close relations in many areas,” Kim said.

He also mentioned that mutual trade and cooperation between the two countries goes back to decades when Pakistan assisted Korea with its development programme and the Planning Commission of Pakistan shared the country’s five-year development plan.

The diplomat added that one of the positive developments with regards to the relationship with Pakistan was the re-launch of Hyundai and Kia Motors in Pakistani markets in 2004.

Kim concluded by saying: “I believe that considering the vast potential of our two countries, there is much scope to further strengthen the relationship.”

Earlier, Chief Minister Murad Ali Shah invited Korean businesses to invest in the province and assured them that his government would fully support them.

The event concluded with a cake-cutting ceremony and a performance by schoolchildren. A number of diplomats and dignitaries, including the governor attended the event.