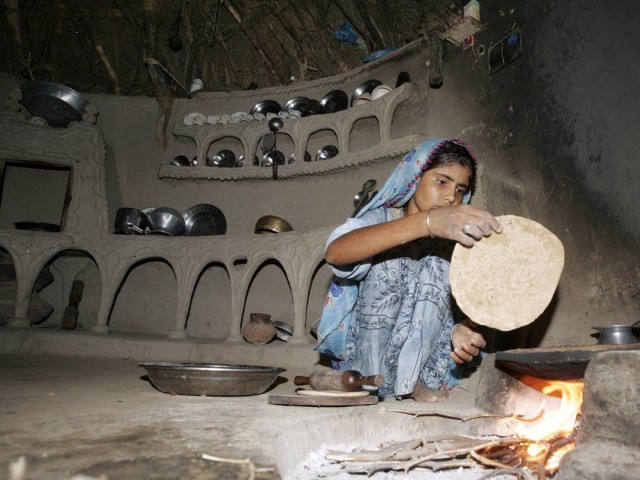 A villager prepares roti (bread) in her mud house in the village Bhattian Jivery at Tharparkar June 25, 2008. PHOTO: REUTERS/FILE

ISLAMABAD: Pakistan remains at the bottom of Global Hunger Index, standing at 106 among 119 developing countries, as the nation faces serious hunger problems and lags behind India and even most of the African states, according to a report of the International Food Policy Research Institute.

The Washington-based IFPRI on Thursday released its fresh Global Hunger Index (GHI) 2017, which showed that Pakistan was facing serious hunger problem and the situation could become ‘alarming’ in the coming years.

The astounding results remind us about the use of about Rs50 billion funds for political purposes, which were actually meant to achieve Prime Minister’s Global Sustainable Development Goals like ending malnutrition, child stunting and child mortality.

Pakistan is ranked at 106 out of 119 countries on the GHI 2017 and continued to raise concerns with its score on the high end of the ‘serious’ category, according to the report.

At 32.6, Pakistan has the second highest hunger score – only Afghanistan has worse – in all of Asia. Its next door neighbour, India, has the third highest score of 31.4 in Asia, and is ranked at 100 overall.

Afghanistan is ranked at 107 with a 33.3 score. Countries like Ethiopia, Angola, Uganda and Rwanda fared better than Pakistan, underscoring growing inequality in the country despite official claims Pakistan was on course to join top 25 economies of the world.

The GHI score is a multidimensional index composed of four indicators—proportion of undernourished in the population, prevalence of child mortality, child stunting, and child wasting (low weight for height).

On the severity scale, a GHI score of less than 10 means ‘low’ prevalence of hunger while a score of more than 50 implies an ‘extremely alarming’ situation.

The report noted that about one-fifth of Pakistan’s total population was undernourished. This should be a matter of concern for policymakers. Instead of improving the situation, the government has delayed releasing the data on some social indicators like the employment status.

The most alarming figure was child stunting, as 45% children were facing the problem of impaired body growth due to poor nutrition. This ratio was 40.3% during 2006 to 2010 period.

According to the GHI report, slightly above one out of every ten children of under five years of age were suffering from wasting –low weight for their height, but it was down from 12.8% during 2006-2010. The child mortality rate remained at 8.1% under the age of five – down from 9.6%, according to the report.

The 2017 report ranked 119 countries in the developing world, nearly half of which have ‘extremely alarming’, ‘alarming’ or ‘serious’ hunger levels. South Asia with 30.9 score has the highest levels of hunger, followed closely by Africa South of the Sahara 29.4.

While referring to the results of various studies conducted between 2011 and 2016, the IFPRI said that between 2013 and 2015, Sindh suffered from a severe drought, particularly the Thar Desert region that covers much of one district, Umerkot, and all of another Tharparkar.

In the most recent Human Development Index for Pakistan, Tharparkar was ranked in the bottom category. An in-depth assessment in 2015 concluded that virtually the entire population of Thar was living below the international poverty line of $1.90 per person per day. Thar has received fewer resources to stimulate its development than other parts of the country.

By way of contrast, the richest districts in Pakistan receive five times more public funds on average than the poorest, according to the report.

The PML-N government had launched two programmes –first the Millennium Development Goals and then Prime Minister’s Global Sustainable Development Goals Achievement Programme — and allocated billions of rupees for improving social indicators across the country. It allocated Rs50 billion for these programmes in last two budgets.

Ironically, the Rs30 billion funds that are placed under the head of the PM’s Global SDGs Achievement Programme during fiscal year 2017-18 are spent on parliamentarians’ schemes like village electrification and provision of gas facilities.

“Let us admit the fact that the MDGs and SDGs funds are actually going to the ruling party’s members of the National Assembly for their development schemes,” said Senator Sherry Rehman on Thursday in a meeting of Public Accounts Committee.

The PAC was discussing delay in the completion of the schemes initiated under the banner of the SDGs.

The IFRI noted that the situation faced by families in drought-affected areas remains precarious. It said in 2016 the Government of Sindh – with support from the World Bank – started to increase its nutrition outreach activities.

Nevertheless, rainfall during the monsoon season of 2015 and 2016 was uneven, and thousands of households are still vulnerable after depletion of their assets.