The countr­y might be 70 years old but, at 70, it is a very young nation coming to grips with realit­ies
By Lt Gen (Retd) Ghulam Mustafa
Published: October 10, 2017
Tweet Email 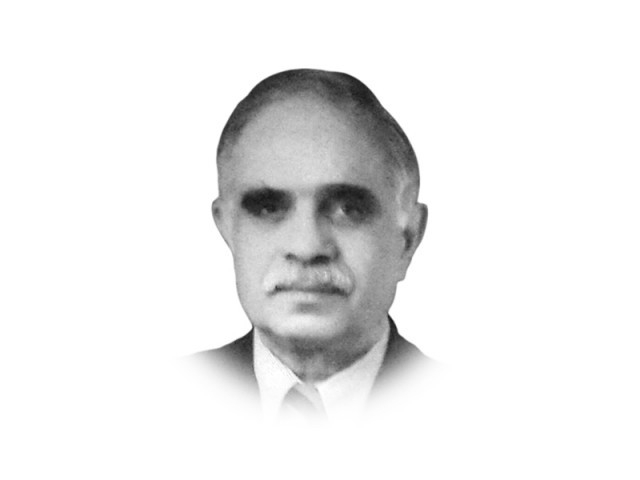 It was in April 1998 when India carried out five nuclear tests — reinforcing its status as the world’s sixth nuclear power. It was a moment of anxiety for all of us. The world knew that Pakistan wasn’t far behind but would it follow India’s suit, and more importantly, was it capable of it? A few days into the debate and I was woken up in the middle of the night by one of my elder cousins from New York, a naturalised American cab driver. He was crying like a baby and was totally incoherent. It took me a while to grasp his meaning. And here’s what he was saying, “Bhai, when will Pakistan carry out its nuclear test? Americans of Indian origin have made our lives miserable by taunting us day in and day out. They are saying that India will destroy Pakistan now. If Pakistan doesn’t do anything soon, I may be forced kill a few taunting Indians.”

That really shook me up. For want of a more concrete reply, I tried to console him with words like not to worry and that he will soon get the good news. It took me about an hour to calm him down and extract a promise that he won’t go on a killing spree till he hears from me. It added further to my own worries on the subject simply because I had no knowledge whether or not we would go the hot testing route, and when, if it was so decided by the powers that be. Luckily, for every Pakistani, we did so on 28th May 1998, within days of the Indian tests. My cousin called me up within minutes of the news becoming public and was crying yet again, louder and incoherent as well. This time it was all jubilation and pride. He had plans for his Indian rivals for this occasion as well. Fortunately, I was able to talk him out of them. He had violence tucked in somewhere there. That’s what Pakistan means to most of us, no matter who we are and where we are.

Here’s another story which energises me even after 17 years. On a visit to one of our institutions, I was introduced to a young , bearded person , attired in modern dress. I was told that he had left a job worth $1 million per annum in a Western country to work in Pakistan for an equivalent of around $12,000 per year. Intrigued, I asked him one of the most stupid questions of my life, “Why did you leave such a lucrative job, far better life style and opt to work here?”

I am glad I did. His reply was worth every bit of my embarrassment.

He said, “Sir, Pakistan needs me far more. That offer was made so that Pakistan could be deprived of my speciality, critical for our progress and development.” No wonder that he had the honour of pressing the button for the first of our nuclear tests on 28th May 1998.

Such young men, in a leadership now, make Pakistan one of the most exciting places, notwithstanding our challenges and shortcomings. They have an urge and a sense of responsibility for their country which can’t be bought. It comes from within and is our real asset. They may not be very large in numbers, but then leaders are always very few.

Pakistan is great in many more ways. Some which come to mind readily are;

1. We can communicate with other in every part of the country despite speaking different languages.

2. We wear same dresses and we love the same kind of food.

3. Even if one quarter of our population enjoys bit of decent lifestyle , it makes a whopping fifty million!

Pakistan’s flag, the largest in South Asia, was hoisted at Wagah on the dot at midnight 13-14 August 2017, to mark our 70th Independence Day. A huge crowd gathered to watch the ceremony, waited patiently for this moment despite torrential rain and gusty winds and it comprised people of all hues and shades. One could almost see the rise in emotions of an already charged crowd as the flag started rising and unfurling. The moment all of it opened up and started fluttering in all its glory, there were very few dry eyes and fewer still who weren’t shouting at top of their voice: Pakistan Zindabad!

We were one nation, ready to bear all hardships to keep this flag flying higher and higher, without distinction and without any conditions. In that one moment, we became Pakistanis with indomitable spirit telling the world that our bonds are much stronger than what separates us. That we have what it takes and that, together, we can move mountains.

Somebody or something just needs to move us towards that destination. Our cricket team did it recently at Lord’s in Britain when we played India in the finals of the ICC Champions Trophy. Beyond our borders, and in a foreign land, Indians were made aware of the enduring validity of Two-Nation Theory when the UK born and bred Asians came out in hordes to support their respective countries. One could see and hear a clear division between British-Pakistanis and British Indians. They didn’t spare their adopted country when our team beat England to qualify for the finals.

Back home, everyone was rooting for Team Pakistan. There were no exceptions. We might seem to be at one another’s throat continuously but slightest hint of external threat is sufficient to jell us together. Don’t have to go far to see this paradox. Recall the nation’s outrage when Donald Trump threatened Pakistan during his policy statement about this part of the world. Mind you, we were busy fighting one another about Panama case at that moment.

We may have our own views about the Panama case ruling. But look at the positives.

The world at large and Pakistanis in particular have yet to come to grips with the fact that the most powerful of the land had to submit to the rule of law. That our apex court and six members of the JIT working under its direct supervision, delivered a unanimous decision disqualifying the sitting prime minister.

Contrary to cries of the affected party, democracy and the system not only survived but the same political dispensation continues unchanged. We may have our strong views about the system but it continues and isn’t in danger in any way unless someone becomes reckless. Saner elements are convinced that the state is in self-correction mode and has proved beyond any doubt that fear tactics about Pakistan being endangered are baseless. Our country has emerged stronger, more vibrant and focused about its future. It is bigger than the sum total of all that it has; all institutions and all its people.

Institutional framework enshrined in the Constitution is coming into play. Slowly but surely, the outline of the system designed in our Constitution has started taking shape. It isn’t very clear as yet but will show itself as we grapple with a multitude of self-created problems. They are huge but not insurmountable. We need to keep faith in the collective wisdom of our people.

The way ahead isn’t easy. A lot more will happen before we get it right. Perseverance and resilience, hallmark of our great people will get us there. The country might be 70 years old but, at 70, it is a very young nation coming to grips with realities. It is questioning itself, an unmistakable sign of its inherent dynamism.

Space for all of us