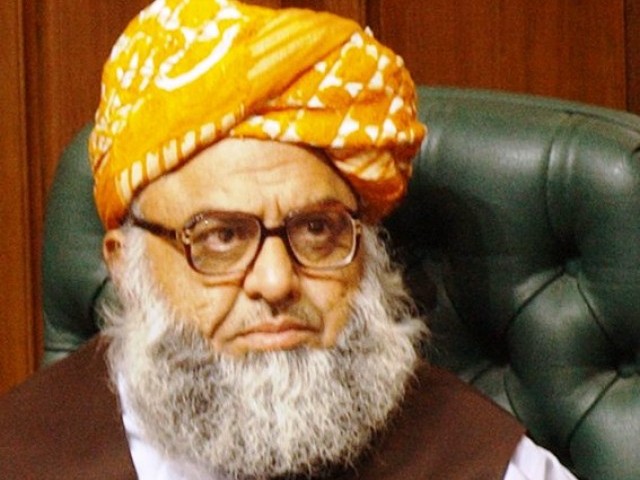 SWAT: Jamiat Ulema-e-Islam-Fazl (JUI-F) chief Maulana Fazlur Rehman warned on Sunday that anyone who tried to change the Khatm-e-Nabuwwat law would be inviting his own death.

Addressing a JUI-F rally in Swat, he congratulated the nation for ‘foiling a conspiracy’ to mould the law in Parliament, while referring to the recently amended “The Elections (Amendment) 2017,” which sparked a controversy. “No one can touch the Khatm-e-Nabuwwat and Khatm-e-Resalat of Prophet Muhammad (PBUH) and if anyone tries he would be inviting his own death,” Rehman said.

“Islam is being attacked. Our enemy is so weak and coward that he attacks us unawares. You saw our enemy tried to secretly attack Khatm-e-Nabuwwat in Parliament but our party was there. We resisted and within 24 hours what damage had been caused was addressed and compensated for,” he said amid slogans by party activists.

“Our friends ask how it happened. You should be thankful that the conspiracy was foiled,” he said, adding that no one had any information that the bill which had been agreed upon in certain shape had been changed later.

Rehman said his party and the seminaries linked with it had defeated terrorism on ideological grounds. The sacrifices of Ulema and seminaries in the war against terrorism should also be recognised publicly, he said, adding that his party and its activists always remained loyal to the country and had laid down their lives for it.

He also said that religious parties and scholars had secured the religious ideology of the country from secular forces.

Rehman said that while supporting former prime minister Nawaz Sharif in the cases against him he was actually striving for the safety and sanctity of Pakistan and trying to protect it from conspiracies. He warned that political turmoil would be the first step of another war aimed at wiping out the country from the map. “We were not heeded and now you see that America is threatening Pakistan and saying that it would impose sanctions against it.”

He said the US had stated that the China-Pakistan Economic Corridor (CPEC) project was controversial because it passed through disputed areas. “America is playing a partisan role and trying to attack the bright future of Pakistan,” he said.

JUI-F Secretary General Maulana Abdul Ghafoor Haideri called for exposing the hand behind the conspiracy to change the oath about the finality of prophethood in the election law.