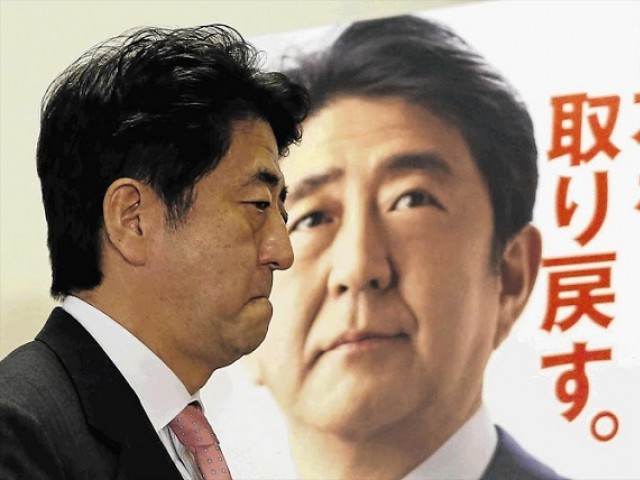 Abe defended his growth plan dubbed Abenomics -- a mixture of aggressive monetary easing and huge government spending along with reforms to the economy intended to pull the country out of decades of deflation and downturn.PHOTO: REUTERS

TOKYO: Japanese Prime Minister Shinzo Abe vowed Sunday to impose “all possible pressure” on North Korea over its nuclear and missile programmes, promising to secure national security in a televised debate before a snap election.

“Stepping up all possible pressure, we need to create a situation in which North Korea wants talks as it will change policy,” Abe told the debate.

“We will protect our country under stable politics.” Abe is seeking a fresh term as tensions with North Korea rise, with Pyongyang in recent months conducting what it described as a hydrogen bomb test and firing two missiles over Japan.

His Liberal Democratic Party (LDP), which has ruled the country for most of the post-war era, is on course to secure a majority.

But it is unclear whether it can again capture some two-thirds of the 465 seats in the powerful lower house, the margin necessary to approve changes to the pacifist constitution which Abe has been pushing.

The pair clashed during the TV debate over economic and other policies.

Former TV anchorwoman Koike has shaken up Japan’s usually sleepy political scene by launching her “Party of Hope”, vowing a break with the old school represented by Abe’s LDP.

“We offer an alternative to voters in order to correct the Abe-dominated politics,” Koike told the live debate.

“Our big goal is to aim to take power,” the media-savvy Koike said without elaborating.

Abe defended his growth plan dubbed Abenomics — a mixture of aggressive monetary easing and huge government spending along with reforms to the economy intended to pull the country out of decades of deflation and downturn.

“If we had not carried out the monetary policy, the fiscal policy and the growth strategy, terrible things would have happened,” he said.
But Koike pointed that consumer spending — accounting for more than half of Japan’s GDP — remained weak under Abenomics, saying: “We are yet to be in a position to pull out of the deflation economy.”
Her party is attempting to field enough candidates to win a majority in the lower house, but Koike has repeatedly stressed that she herself will not stand.

More than half the candidates named by Koike so far have been former members of the DP.

The election is now effectively a three-horse race between the LDP, Koike’s party and a new centre-left grouping of former DP members that did not jump on the Tokyo governor’s bandwagon.