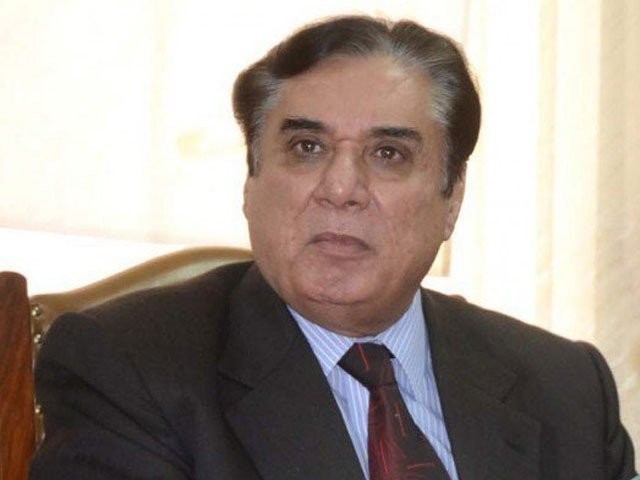 ISLAMABAD: Justice (retd) Javed Iqbal of the Supreme Court has been appointed Chairman of the National Accountability Bureau (NAB) as the government and opposition agreed on his appointment on Sunday after several rounds of deliberations.

“In exercise of the powers… the President of Islamic Republic of Pakistan is pleased to appoint Justcie (retd) Javed Iqbal, a retired judge of the Supreme Court, as Chairman, NAB, after consultation with the Leader of the House (Prime Minister Shahid Khaqan Abbasi) and Leader of the Opposition in the National Assembly (Syed Khursheed Shah) for a non-extendable period of four years,” reads a notification issued by the government on Sunday evening.

Iqbal’s name was among a list of three – along with Justice (retd) Faqeer Muhammad Khokhar and former secretary of the Election Commission of Pakistan Ishtiak Ahmad – proposed for the slot by Shah following consultation with other opposition parties, except the Pakistan Tehreek-e-Insaf. He had retired from the Supreme Court in 2011. The government had suggested the names of Justice (retd) Rehmat Jafri, Justice (retd) Ijaz Chaudhry and Intelligence Bureau (IB) Director General Aftab Sultan.

Justice Iqbal had refused to take oath on a Provisional Constitutional Order in November 2007 and as a result was removed from his position during the regime of Pervez Musharraf. However, in 2009 he was reinstated as an SC judge.

In 2012, Justice Iqbal was appointed as head of the Abbottabad Inquiry Commission tasked to investigate the circumstances surrounding the US raid and killing of Al Qaeda chief Osama bin Laden. The 700-page report compiled by him in 2013 was never made public by the government.

He also served as the chairman of a judicial commission mandated to trace missing persons.

Justice Iqbal will formally assume the office on October 10 upon the completion of the four-year term of outgoing NAB chairman Qamar Zaman Chaudhry.

A few hours before the issuance of the notification, Shah informed reporters in Sukkur that a consensus over the name of Justice Iqbal had been reached between the government and opposition.

“He has an outstanding record. He has served as a Supreme Court judge and we pray that he fulfils his new responsibilities in the same manner,” Khursheed Shah said.

In accordance with the relevant law, the prime minister and opposition leader had proposed three names each for the slot and held consultation to finalise one of them.

The PTI, however, had rejected all the six names and proposed former IB chief Dr Shoaib Suddle, Justice (retd) Falak Sher and former chief secretary of Khyber-Pakhtunkhwa Muhammad Shahzad Arbab for the post.

Talking to The Express Tribune, PTI MNA Asad Umar said the party’s Chairman Imran Khan had convened a meeting to discuss the development on Monday. Umar said the chairman would announce the party’s point of view about the appointment after holding discussions with senior leaders.

Jamaat-e-Islami Secretary General Liaquat Baloch said Shah had consulted his party and finalising the name for the appointment was the constitutional right of the PM and the opposition leader.