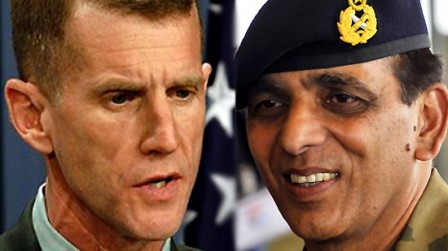 The two met at the General headquarters in Rawalpindi and discussed matters of mutual interest and defence cooperation.

NATO and US forces action against militants came under discussion. The visiting dignitary provided an update on the alliance’s current operations in Afghanistan.

General Stanley is in Pakistan to discuss regional security. So far, the general has held a briefing for parliamentarians on the current operations of ISAF in Afghanistan.

This session provided an opportunity for the parliamentarians to share their concerns and opinions with McChrystal.

McChrystal’s visit to Pakistan comes as part of his continual series of meetings with the Chief of Army Staff as well as the top leadership of the country.