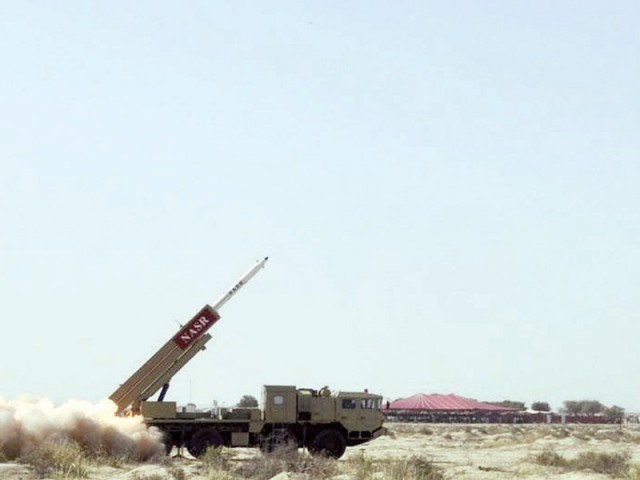 The missile has been developed to add deterrence value to the Strategic Weapons Development programme. PHOTO: ISPR

According to the statement, the missile has been developed to add deterrence value to Pakistan’s Strategic Weapons Development programme at shorter ranges. NASR, with a range of 60 kilometres, carries nuclear warheads of appropriate yield with high accuracy, shoot and scoot attributes. This quick response system addresses the need to deter evolving threats, it said.

On this occasion, Kidwai said that the test was a very important milestone in consolidating Pakistan’s strategic deterrence capability at all levels of the threat spectrum. He said that in the hierarchy of military operations, the NASR Weapon System now provides Pakistan with short range missile capability in addition to the already available medium and long range ballistic missiles and cruise missiles in its inventory.

Military sources said that the new missile system belongs to the category of tactical nuclear weapons and is a low yield battlefield deterrent, which is capable of inflicting damage on mechanised forces such as armed brigades and divisions.

With the development of this multi- tube, ‘shoot-n-scoot’ capability, Indian planners will now be deterred from considering options of limited war, the sources said.

According to ISPR’s statement, the successful test has also been appreciated by President Asif Ali Zardari and Prime Minister Yousaf Raza Gilani, who have congratulated the scientists and engineers on their outstanding success.