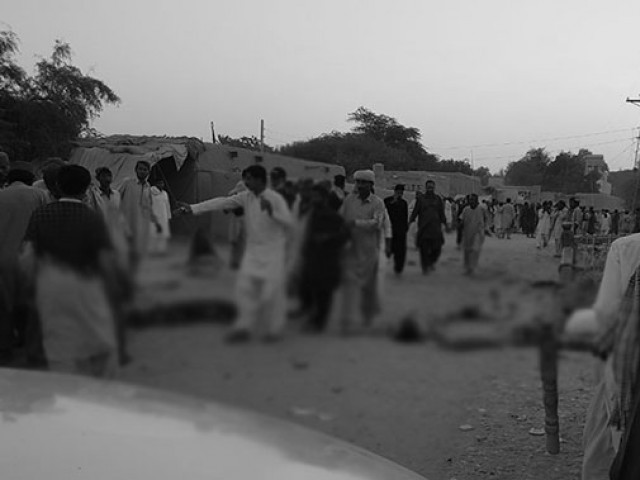 Devotees gather around the bodies of blast victims after a suicide bombing near a sufi shrine in the Gandawa area of Jhal Magsi district of Balochistan on October 5, 2017. PHOTO: AFP

KARACHI: Dargah Fatehpur is a shrine to two Sufi poets – father and son – who offered messages of peace and coexistence.

But messages of that heavenly state of being called peace are clearly offensive to some people because the shrine was attacked for the second time in two years. The death toll from the suicide attack on Thursday was already up to 18 by the early evening.

Sufi poets Rakhyal Shah and Cheezal Shah were mystics from a Sufi order of Sindh, although their shrine was technically in Balochistan, in the small town of Sohbatpur in Jhal Magsi.

Rakhyal was born in 1852 in Mirpur, Balochistan, one of his devotees Hussain Jaafri told The Express Tribune. His eldest brother, Sufi Abdul Nabi Shah, whom he was heavily influenced by spiritually, was a disciple of Fakir Jaanullah Shah, himself a famous devotee of Sufi Inayatullah Shah, he said.

Jaafri said Rakhyal Shah preached equality and rightful ways of life. “Sain always urged people to be kind and generous, which is also reflected in his poetry. Every three years, he would give away all his belongings to the needy and poor and even give them all his stored water,” he added. “As every new day will come, God will give us new means of sustenance,” Jaafri explained.

“Chhade de mulk duniya khe, wahe buth ishaq jon ghalihyoon [Give up this materialistic world, let share the tales of love],” is one example of the divine love expressed in Rakhyal Shah’s poetry.

Journalist Nisar Khokhar, who frequently visits the shrines of the Sufi mystics during the annual Urs there, said, “Hundreds of thousands of people from Sindh, Balochistan, and the Saraiki belt of Punjab are among the devotees who flock to Fatehpur during the Urs celebration.”

While citing examples of coexistence and pluralism, Khokhar told The Express Tribune that Hindus of the area are also among the devotees of Rakhyal Shah and Cheezal Shah, further explaining that “the work of both the poets was first compiled by Hindu devotees”.

An important aspect of their poetry is that it can easily be sung, he said, adding that the bulk of Siraki and Sindhi Sufi devotional poetry is sung in every corner of Sindh and at the famous Jhok Sharif Dargah in southern Sindh.

Khokhar said attendees would ignore the threats of suicide attacks, although extremist elements in surrounding areas such as Jacobabad and Shikarpur do present a huge threat to all such mystic shrines.

Writer Zulfiqar Qadri said that a number of people, especially from the upper Sindh, are among the devotees and have a spiritual connection with the Dargah of Fatehpur. “The message of Sain Rakhyal Shah has left a great imprint on the lives of people of upper Sindh with the humanitarian message.”

He further added, “Although extremist elements pose a great threat to Sufi shrines and those attending them, people still visit them because of their messages of peace.”

Sindhi poet and critic Rakhyal Morai told The Express Tribune, “Sufi mystics like Rakhyal Shah and Cheezal Shah are beautiful beads on the garland that is Sindhi poetry.”

Morai added that the mystic poets were given high reverence by scholars in Sindh. Although they were based in Balochistan, they are considered among the great Sindhi poets after Shah Abdul Latif Bhittai and Sachal Sarmast.

Rakhyal Shah and Cheezal Shah, he said, are examples of why we, as a nation, are vibrant and lively people and can face extremism with courage.