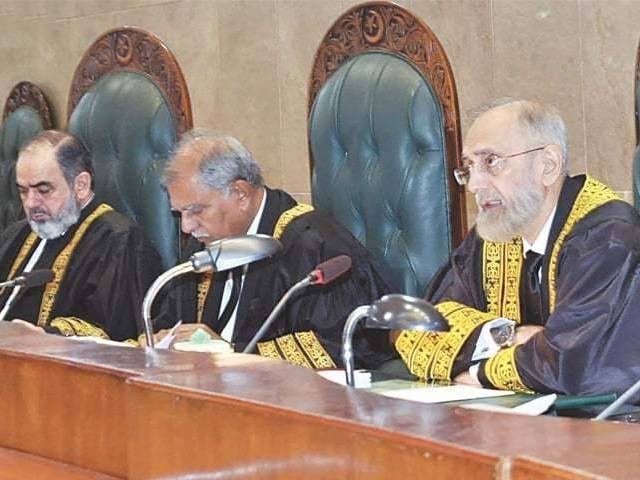 Sources told The Express Tribune that the council, chaired by Chief Justice of Pakistan Saqib Nisar, resumed hearing of the case, even though the only witness withdrew and did not appear.

However, judgments issued by the accused have been compiled, certified and submitted before the council. The judge in question has been asked to submit a response and/or produce evidence by the next hearing.

The LHC judge has appointed Khawaja Haris as his counsel while Additional Attorney General Chaudhry Amir Rehman is appearing as prosecutor.

LHC judge resigns ahead of SJC proceedings into corruption charge

A second meeting will be conducted on October 9, to examine another case pertaining to an LHC judge, Farrukh Irfan, whose name was also mentioned during the Panama leaks last year. The council will also resume proceedings against Islamabad High Court judge, Shaukat Siddiqui, on October 10.

Supreme Court Bar Association (SCBA) President Rasheed A Rizvi told the audience at the New Judicial Year opening ceremony that Article 209 of the Constitution was never successfully invoked against a judge.

“We need to move away from our rigid inconsistency toward exclusive self-regulation. Each of us needs to involve the other more substantively, both in the process of entry or removal. Perhaps, like many other jurisdictions, we can even consider involving reputable persons from other professions and (members of) civil society in the process. Perhaps, sealing oneself off from external scrutiny is not a necessary pre-requisite for independence,” Rizvi had said.