Bench issues notice­s to federa­l, provin­cial author­ities to file commen­ts by next hearin­g
By Our Correspondent
Published: October 3, 2017
Tweet Email 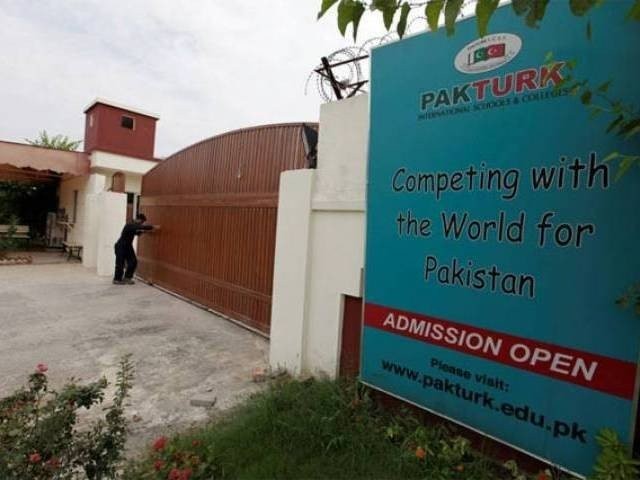 In December last year, the deportation issue was taken up in court by a group of parents, students and teachers of the Pak-Turk schools against the deportation of Turkish teaching staff, following a request by the Turkish government. PHOTO:REUTERS

KARACHI: The Sindh High Court (SHC) restrained on Tuesday the federal authorities concerned from deporting former employees of the Pak-Turk International Schools in the province till October 10.

A two-judge bench, headed by Justice Munib Akhtar, also issued notices to the federal and provincial authorities concerned to file their comments in this regard by the next hearing.

The stay order came on a petition jointly filed by the former employees of the Pak-Turk International Schools, who approached the court last week apprehending their likely deportation after their colleague was believed to have gone missing, along with his family, from Lahore.

In the plea, the Turkish nationals said Islamabad was trying to deport staffers of the Pak-Turk schools under pressure from Ankara. They said that the court had previously restrained the federal authorities from deporting the Turkish nationals who were performing teaching duties at the schools run by the foundation of US-based Turkish leader Fethullah Gulen.

They alleged that the authorities were still deporting Turkish nationals and their families in violation of the order passed by the high court.

The petitioners mentioned that a former principal of a Pak-Turk school, Mesut Kacmez, and his family members were taken away by men in plainclothes from their residence in Lahore on September 27.

Kacmez, with his wife and two young daughters, was reportedly taken to an undisclosed location, they said, quoting media reports.

Direction was also sought for the interior ministry to put the names of all the employees of the Pak-Turk schools on the Exit Control List (ECL) to stop their deportation.

In December last year, the deportation issue was taken up in court by a group of parents, students and teachers of the Pak-Turk schools against the deportation of Turkish teaching staff, following a request by the Turkish government.

Turkey had requested Pakistan to close down the Pak-Turk schools run by Gulen, who had been accused of instigating a coup attempt last year.

The interior ministry had in November last year ordered the Turkish staff of the educational network to leave Pakistan, rejecting their applications for visa extensions.

The students and teachers had argued that the Pak-Turk Foundation was a non-profit, non-governmental organisation which had nothing to do with the politics of Pakistan or Turkey. The petitioners submitted that the deportation order would hurt the interests of 11,000 students studying at the schools.

They had informed the court that the Turkish teachers had applied for an extension in their visas, but instead of granting the extension, the government ordered the staff to leave the country.

They maintained that the Pak-Turk schools provide inexpensive but high-quality education. “Therefore, the decision to deport the teachers will harm the future of the students of these schools.”