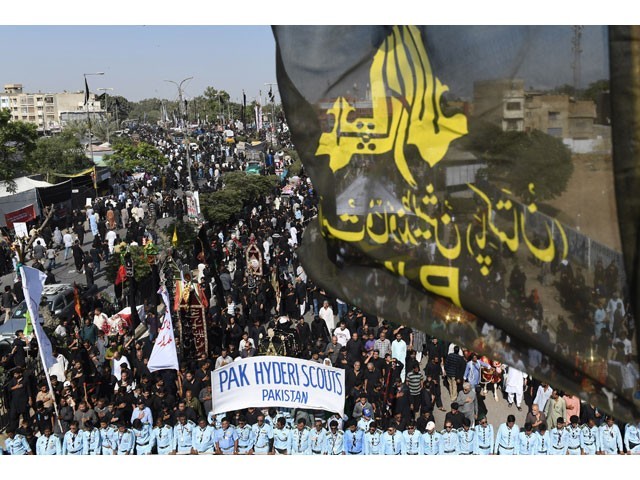 Shias take part in a religious procession held ahead of Ashura on the ninth day of the holy month of Muharram in Karachi on September 30, 2017. PHOTO: AFP

KARACHI / PESHAWAR / LAHORE: Processions and majalis for the ninth of Muharram organised to commemorate the sacrifices of Hazrat Imam Hussain (RA) concluded peacefully across the country.

In Karachi, major procession was held at Hussainian-Iranian Imambargah in Kharadar amid strict security measures, which included a ban on pillion riding and suspension of mobile phone and internet services.

A majlis was held at Nishtar Park from where the main mourning procession emerged and proceeded through MA Jinnah Road, Mehfil-e-Shah Khurasan, Saddar, Preedy Street and Baba-e-Urdu Road. A large number of men, women and children participated in the main procession.

In Peshawar, major procession was initiated from imambargah in Saddar bazaar around 10am and progressed through designated routes and later culminated at the same starting point. Similarly, zuljinah majalis were held across the city.

In Lahore, major procession emerged from Islampura under stringent security, provided by the personnel of police, elite force and Rangers.