A young design­er launch­es her first collec­tion in time for the summer.
By Maira Pagganwala
Published: April 18, 2011
Tweet Email 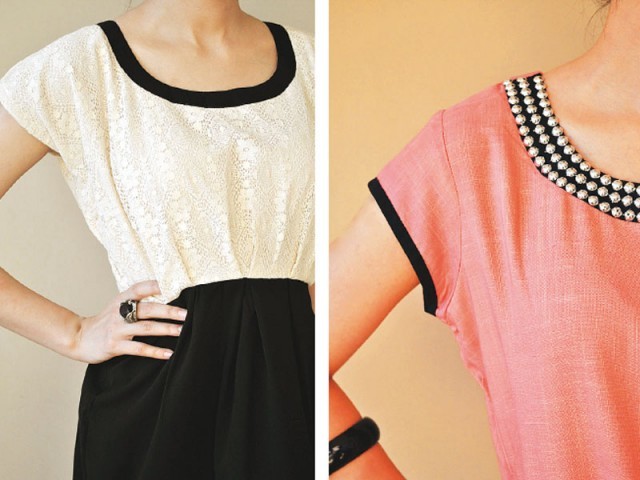 As I entered the house where the exhibition of western clothing was held, I was greeted by a girl with beautifully done up eyes that instantly made me think of Elizabeth Taylor in her iconic  role as Cleopatra. This pretty young thing, dressed in black from head to toe, was the designer Anan Khan, who had only recently moved to Pakistan and launched her label, Nineteen 87, in Karachi.

“I’m obsessed with that year,” she told me.

Khan was born in 1987. “A lot of people here are weirded out about my date of birth being out in the open,” she said, laughing. “You know how people think here, but I don’t care.”

Her clothes consist of formal embellished tops, casual daily wear and floral maxi dresses. There was even an ivory lace vest that I have my eye on.

“Everything here reflects me in some way or another. I’ve done clothes that I would wear,” Khan said.

She proudly told me that everything was 100 per cent Pakistani, from the fabric to the stitching. Although Khan takes orders, she can’t promise the exact same print or material, simply because she’d like to preserve some “exclusivity”.

The collection was designed with the hot summer months in mind. “I wanted to work with clothes that one can wear to beat the intense heat in this part of the world, something that a person can feel comfortable and cool in,” Khan said. “That is why I chose light materials.”

When Khan told me that she’d lived in Saudi Arabia, Singapore, Dubai and London, I asked her why she chose Pakistan to launch her label. She explained that she saw potential here, “despite no electricity being the norm.” According to Khan, Pakistani people know where to go to for eastern clothes but they don’t have much of a choice when it comes to western wear.

Before launching her collection, Khan designed for friends in London and Canada, mainly getting commissions through word of mouth, or as she puts it, “gossip worked in my favour”. People wanted her pieces, so she decided it was finally time to fulfill her childhood dream and design on a larger scale.

I asked her if she’d ever try designing eastern wear, but she says it isn’t likely. “Of course I’ve designed eastern ensembles for myself. All women here have done that at some point, and everyone’s got a bit of a designer streak. However, I’m a little lost when it comes to desi wear and I prefer buying that elsewhere,” she elaborated.

Khan attended the London School of Arts where she studied graphic design. She pointed out that her background in graphic design helped her create her look book, which the 23-year- old managed entirely on her own.

Khan is a freelance graphic designer, but her focus right now is on fashion. “This is it. This is my passion, my hobby — this is what I do in whatever free time I get. I design,” she said.