A copy of the warran­ts also sent to their houses in Lahore; summon­ed on Oct 2
By News Desk
Published: September 28, 2017
Tweet Email 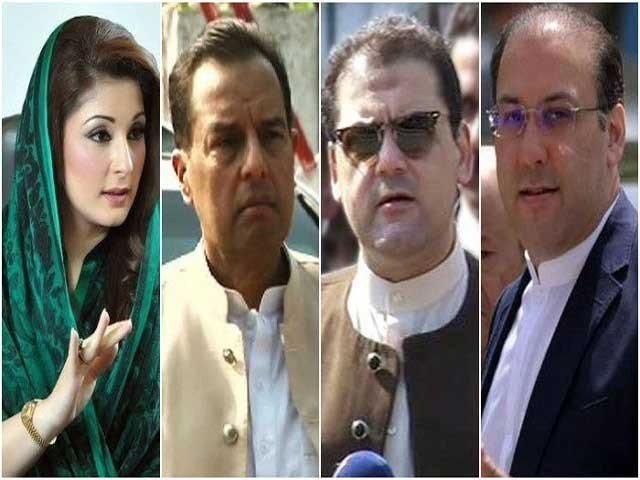 The Accountability Court in the federal capital on Thursday issued its written order pertaining to the hearing of the references against former prime minister Nawaz Sharif and his children, held on Tuesday.

The court order said that a decision on Sharif’s petition for exemption from appearing in the court had been reserved, while bailable warrants for the arrest of Sharif’s children had been sent to London.

According to the court order, the hearing could not continue on Tuesday because of mismanagement on the court premises, and the proceedings would resume on the next date of hearing – Oct 2.

Meanwhile, notices for the bailable arrest warrants of Sharif’s three children and his son-in-law were sent to their London addresses, Express News reported. A copy of the notices is also sent to their Lahore addresses.

The notices to Sharif’s children have been sent through the Pakistan High Commission London, which carry their Avenfield, Park Lane, address. According to a private TV channel, the notices had been received by the High Commission.

Sharif in the docks

Sharif was disqualified from holding public office by the Supreme Court on July 28 in the Panamagate case due to concealed assets. The apex court also ordered the country’s top graft buster, the National Accountability Bureau (NAB), to file corruption references against Sharif, his two sons, daughter, and son-in-law.

On the last date of hearing in the accountability court, Sharif himself appeared before the judge but none of his children did. Noting absence of accused Hassan Nawaz and Hussain Nawaz despite receipt of summons at the “Avenfield House Park Lane (Mayfair Apartments) London on 23rd September, 2017” through the Pakistan High Commission in London, Judge Muhammad Bashir issued their bailable warrants.

“Warrants of arrest … shall be issued against them,” the judge stated. In the warrants, the court directed NAB to arrest the accused persons and produce them before the court. “Herein fail not,” he added.

The order stated further that if the accused “give bail in the sum of Rs1 million each with one surety of the same amount to attend the next hearing and to continue to attend until otherwise directed by the court”, he may be released.