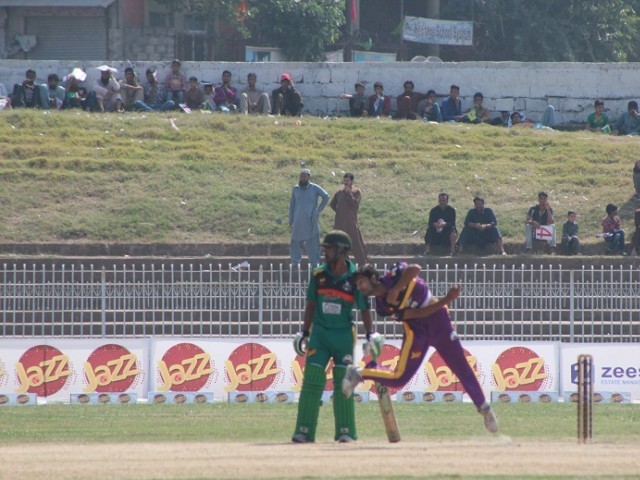 MUZAFFARABAD: Surrounded by hills and filled with nothing but calm country for as far as the eye can see, the Muzaffarabad Cricket Stadium slowly but surely becomes the centre of a flurry of activity.

Players and spectators alike throng to the stadium, pouring in from all corners; a sight the stadium hasn’t seen for what seems like eons.

Jazz Rising Stars T20 Cup players hailed from various parts of Punjab and Kashmir — the cities of Gujranwala, Sargodha, Rawalpindi and Muzaffarabad being the chief among them — battle it out in a tournament organised by the Lahore Qalandars.

But don’t let the serene environment fool you though. Just 38 miles away stands the Chakoti LOC; where tensions between the Indian Army and Kashmiri civilians escalate on a regular basis.

Not that far away, the sounds of bombs and gunfire echo hauntingly through the valleys. But here the only screams of anguish are the ones let out at a poor delivery or a dropped catch. For the first time in its history, a match at the Muzaffarabad Cricket Stadium is being broadcasted live on TV.

School and college students rush into the stadium and it isn’t long before a carnival-esque feel permeates the valley. For a few glorious hours, the mood in this part of Kashmir is as pleasant as its scenery.

Azad Jammu and Kashmir Prime Minister Raja Farooq Haider expressed to The Express Tribune his utter delight at seeing the kids act in such a carefree manner.

“It’s incredible seeing all these kids and adults come out to watch a match with so much passion, but at the same time I think about our civilians who are facing the Indian army,” he said. “They have been bombing us for some time now.”

Cricket is not only playing its role in bringing forward Pakistan’s positive image across the world but it is also a very good uniting factor among the people of Kashmir.

“These matches where teams from different regions and cities play against cricketers from Kashmir really help the country come together,” he said. “When they travel together and they play together, they get to know about each other’s culture and traditions and that makes them feel like one. This also broadens their vision and helps inculcate passion for Pakistan.”

Farooq also discussed AJK’s regional team playing in Pakistan’s domestic circuit. “We have seen domestic players coming up in tournaments and the Pakistan Super League has opened the doors for many more Kashmiris to be a part of Pakistan’s cricketing structure,” he said.

Meanwhile, Lahore Qalandars chairman Fawad Rana was also pleasantly surprised with the enthusiasm of the crowd. “It is incredible to see such a huge crowed filling up the stadium, especially since the majority of them were students,” he said. “Seeing so much joy among these kids is amazing.”