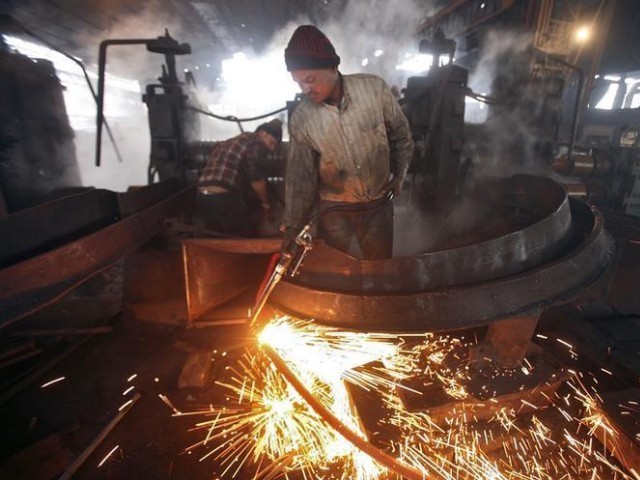 A worker cuts a steel rod inside a steel factory. PHOTO: REUTERS

KARACHI: Auto part manufacturers have urged the government to immediately withdraw regulatory duty on the import of industrial steel materials because it is rending the industry uncompetitive.

“We have been requesting the government to remove the duty for two and-a-half years, but nobody is listening to us,” Pakistan Association of Parts & Accessories Manufacturers (Paapam) Chairman Mashood Ali Khan said.

Regulatory duty was first imposed in January 2015 at the rate of 5% to 15% on steel imports and was supposed to be a temporary measure. However, the next year, it was increased from 15% to 35%, stated the press release.

“This is the third year of this regime. By increasing tariffs on import of raw materials, domestic industry was made uncompetitive. For example, 30%-35% additional tariff on steel may have helped some inefficient units, but it considerably increased the costs of the value added sectors producing fine quality auto parts and engineering products,” added Khan.

The Paapam chairman said that these interventions were made for the protection of the local steel industry, which mainly produces the commodity for the construction sector. However, the affected PCT codes were common for raw materials allowed to be imported by the auto parts industry at concessionary duty because these materials were not produced by the local steel industry (who

have been protected through levy of regulatory duty).

This fact has also been duly recognised in the new Auto Development Policy (ADP), where no regulatory duty was imposed on raw materials imported by the auto industry, provided they are not manufactured locally.

The previous auto policy and the current ADP have both been designed to encourage localisation, resulting in investment in the country, saving of foreign currency outflows, creating employment opportunities and contributing towards economic growth.