How PM Abbasi can rid Pakistan of load-shedding

How PM Abbasi can rid Pakistan of load-shedding 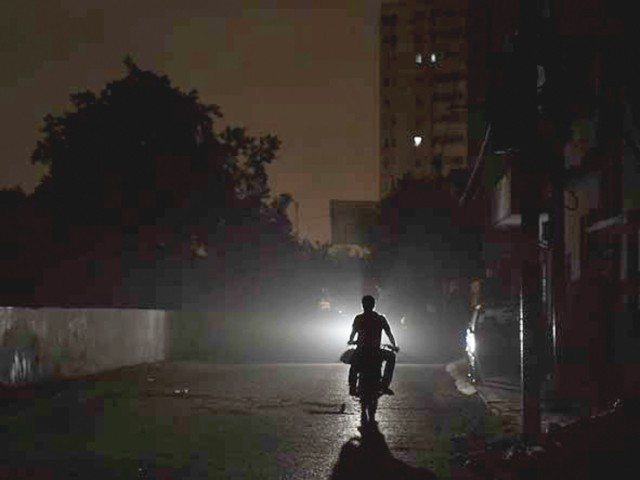 ISLAMABAD: It is almost writing on the wall now that the reasons behind the endemic power outages in Pakistan broadly fall into two categories: firstly, non-payment of dues to power houses which incapacitates them to procure fuel and secondly, the absence of a mechanism to finance these payments.

The reasons seem simple enough so the question remains: why hasn’t anyone been able to do anything about it? And why Prime Minister Khaqan Abbasi has what it takes to finally do something about it?

In order to understand the debilitating inaction and ineffectiveness of governments in the last 10 years to address this chronic issue, we have to delve deep in to the psyche and motivation of the individuals tasked with the responsibility of curing this ill and investigate why they have not been able to identify underlying issues and take decisive and corrective action. First of all, a historical perspective can help lay a foundation for further enquiry.

Nassim Nicholas Taleb, who is famously known to have predicted the 2008 global financial crisis, in his bestselling book ‘The Black Swan’ suggests that the concept of accountability, or a sense of ‘skin in the game’ in his words, is central to ensure sincerity of the human endeavour especially while holding executive authority. Asymmetry in reward and risk is bound to invite the poorest of behaviours from men and invoke the lowliest of traits.

He goes on to say that the 2008 global financial crisis is a perfect example of this behaviour. Risky loans were rated as AAA by credit rating agencies that had nothing to lose if everything collapsed and CEOs of financial institutions were ready to turn their back on an increasing default rate and carry on as if it was business as usual. Once the dust settled on one of the biggest economic busts of the human era, the culprits mostly escaped scot free and tax payers were left holding the bill.

One can even find parallels to this phenomenon in ancient writings. According to the Code of Hammurabi, which is the Babylonian code of law of ancient Mesopotamia dating back to about 1754 BC, if a house was to suffer structural damage, decimate and kill its owner, the builder was put to death. May be that is a bit extreme, but it is fascinating how long we have known to hold people responsible when they have executive authority but somehow always fail to find ways to do so.

Expensive delays in mega projects (case in point Nandipur Power Project) and corrupt and fraudulent practices in the public sector (Metro Multan etcetera) are prime examples of such behaviour. Where the people involved in the decision making are driven by a misdirected set of incentives: often geared towards self-interest; and often at odds with the responsibilities they are expected to deliver on.

So now that we have a fair background of where it all goes wrong, it needs to be enquired as to how PM Abbasi would be able to achieve an almost impossible feat. Normally it is foolish to expect any political figure, most of whom have wealth parked in off-shore accounts and families residing in other countries, to exhibit a sense of ‘skin in the game’ and thus put sincere effort towards public welfare.

But at times, one encounters leaders who ever-so-subtly exhibit this valuable trait. Case in point: the LNG initiative that was pushed by the then Minister for Petroleum and Natural Resources. The completion of the maiden LNG terminal in record time in a country like Pakistan, where almost every project of public welfare somehow gets tangled in red tape and marred by corruption, is a miracle by all means.

PM Abbasi took total responsibility of the project and put his own reputation on the line by pursuing the project with such vigour.

A similar approach is needed for getting rid of load-shedding. The power sector is made up of ailing utilities which are regulated by a paralysing regulator and governed by out-dated laws. Instead of addressing individual issues of power sector minutely, let us first examine what has been happening quietly in the gas sector under the leadership of PM Abbasi.

The journey of Sui Northern Gas Pipeline Limited (SNGPL) from a decaying public utility to a prospering business is not only remarkable, but highly understated and, therefore, needs to be prudently mapped and drawn inference from.

Under Arif Hameed’s leadership the organisation plummeted into the proverbial abyss as equity started shrinking and sales declined from over 260 billion to less than 170 billion rupees.

And as with any self-serving leader, when the opportunity for growth presented itself in the form of induction of LNG into the grid, SNGPL MD Arif Hameed did his utmost to avoid signing the tri-partite agreement that would hold SNGPL responsible for not only sale of LNG but also pay its cost on a timely basis.

Paying dues on time was something the Hameed-led SNGPL was used to doing: playing merry go round with government-owned gas sellers was a common practice, neither of which had any real concern with demanding payments for their supplies.

For once, the gas was foreign; with a price tag to be paid in dollars, and not merely free candy to be distributed amongst friends.

It was at this juncture that PM Abbasi managed an overhauling of not only the senior management at SNGPL but the general culture of the organisation. It was made very clear that this time around, LNG was to be inducted in the grid for good and unlike local gas – which is considered a free for all- payments would have to be ensured, failing which there would be real consequences in the form of penalties backed by Stand-by LC(s).

This key structural change meant that the unimaginative and fixed mind-set prevalent in the SNGPL gave way to an attitude geared towards efficiency and growth. For the first time in 10 years, distribution losses which were at a debilitating 11-12% came down to a manageable 7%-8%. Share prices which averaged Rs20/share in 2014 rose seven-fold to more than Rs140/share.

Let us put this remarkable change into perspective. Organisations – be it public utilities or governments- are organic systems and work like gardens. There is a place called ‘Death Valley’ in the US. It is the hottest and driest place in the whole of North America and nothing grows there because there is no rain. In the winter of 2004, almost 7 inches of rain (which is a lot) fell in a very short period of time. In the following spring, the Death Valley sprung to life; the whole floor of the valley was carpeted with flowers for a short while.

The lesson from the story is this: the ‘death valley’ is not dead. It is dormant. Right beneath the surface are these seeds of possibility waiting for the right conditions to sprout. The actual role of leadership thus is not ‘command and control’ but ‘climate control’. If the conditions are right, the wheel of progress moves inevitably.

What PM Abbasi has demonstrated as the Minister for Petroleum and Natural Resources is his unique set of skills: his ability to create the right ‘climate’ for a progressive and thriving gas sector in the country and a risk-taking attitude whereby he has put himself on the line whenever the progress of the projects under his supervision was at stake. It is thus inevitable that he will be able to cure the incorrigible state of the power sector.

The writer has been involved in the CNG business since 2006. He is also the Senior Vice President of the All Pakistan CNG Owners’ Association (APCOA)