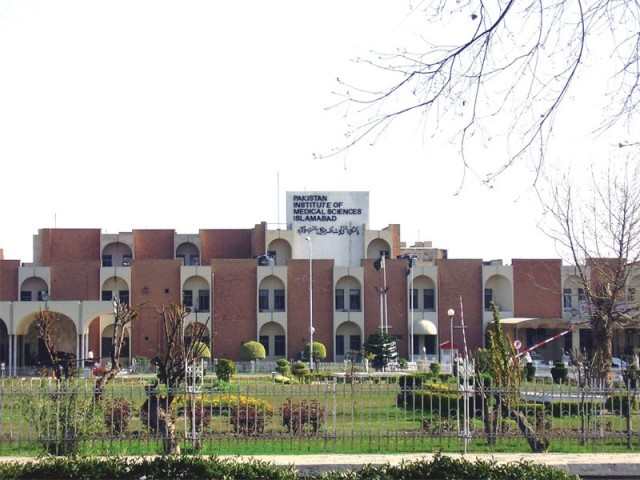 Assistant professor refutes allegations, calls them part of tactics of ‘mafia’ against him. PHOTO: EXPRESS

ISLAMABAD: The anti-harassment committee at the Pakistan Institute of Medical Sciences (Pims) has opened a probe into an assistant professor after allegations of sexual harassment were levelled against him by a female postgraduate trainee.

The committee started an inquiry after a written application was filed with the body alleging that the assistant professor, who was recently appointed the Cardiac Centre, had molested her.  A copy of the application is available with The Express Tribune.

The female postgraduate trainee claimed that she was on duty at the centre when the professor called her to his room. There, she started discussing preparations for an impending operation.

As he demonstrated how to take an x-ray scan of the heart, he allegedly touched her inappropriately.

The trainee wrote that when the professor next summoned her to his room, she took along a female house officer with her.

To the trainee’s surprise, the house officer expressed reluctance, complaining about the professor’s lewd comments. The officer, though, agreed to accompany the trainee.

When they reached the office, the professor asked the trainee why had she brought the house officer along objected to her presence.

Thereafter, the trainee started avoiding the professor and ignored the summons to his room – including calls to her cell phone.

As she continued ignoring him, the professor started stating in front of her colleagues that it was unfortunate that the trainee was a female and that she had chosen the field of cardiac surgery.

There is a price for everything, and if she is not ready to pay that price, then she should leave cardiac surgery, the trainee claimed the professor had said.

Quoting objectionable statement, the trainee added that the professor threatened to malign her if she reported the matter to anyone.

She requested the committee to save her training and take strict action against the professor for this ‘unethical and nonprofessional behaviour’.

Terming the charges against him as baseless, the professor said that the complaint had been orchestrated by the same mafia which did not want competent and qualified foreign doctors to work in Pakistan.

“I could have joined any private sector hospital on hefty packages as I am the only one conducting surgeries without opening the chest. But I wanted to work for the poor. There is meagre salary, no allowance and life threats and pressures [at Pims] yet I have decided to stay here,” he said.

“I have been threatened and was told that I would be killed just like the former head of the centre Professor Dr Shahid Nawaz Malik was killed at the hospital’s entrance,” the assistant professor added.

“My operation lists were cancelled and now this allegation has been levelled against me to stop me,” he added.

He said he has asked the committee to thoroughly probe the matter since he is sure he will come out clean since nothing happened. “I have also requested them to expose the mafia behind [the allegations] it too who do not let anyone work here.”

The professor has worked in several cardiology centres of Pakistan including the Rawalpindi Institute of Cardiology and has over 10 years of experience of working in in cardiac surgery in the UK.

He was also a member of a team which performed Pakistan’s first Multi-vessel Minimally Invasive Beating Heart CABG (MIDCAB) – coronary artery surgery without opening the chest or sternum – on a beating heart at the Rawalpindi Institute of Cardiology.

Media reports had suggested that he had been obliged and appointed on a special position at the Faisalabad Institute of Cardiology for rendering services during the pre and post operation on former prime minister Nawaz Sharif in London in 2011.

He was subsequently appointed on the tenure-track system at the cardiac surgery centre of Pims.