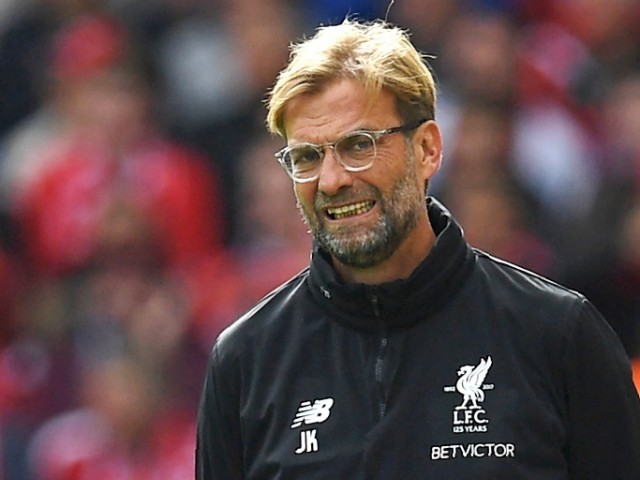 Liverpool's weaknesses in defence are becoming a glaring issue for Klopp who admitted that he was aware of that fact. PHOTO: AFP

LIVERPOOL: Jurgen Klopp admitted his Liverpool side must improve defensively after more problems at the back cost them two home points in a 1-1 Premier League draw with Burnley.

Liverpool dominated against Sean Dyche’s team but had to come from behind with Mohamed Salah rescuing a point for Klopp after mistakes had gifted Scott Arfield the opening goal for the visitors.

At the end of a week in which Liverpool also lost 5-0 at Manchester City and were held at home by Sevilla in their opening Champions League group game, Klopp was left trying to lift his frustrated team and supporters.

“Yes, result wise it is frustrating but honestly I am as a person not like this,” said Klopp, who made seven changes from the Sevilla game. “If I can get over the few more than unlucky situations then it is my job to see the performance. Why we feel so disappointed or frustrated is because we see what this team can do. Seven changes and playing this type of football, no one should take it for granted. It shows we have quality. Now we have to use this quality consistently. We could have won pretty much all our games so far when you think about the performance.”

Liverpool’s weaknesses in defence are becoming a glaring issue for Klopp who admitted that he was aware of that fact, given the domination his team had enjoyed over Burnley in terms of possession and shots.

“It feels strange, it feels wrong but it is a fact we drew,” said Klopp. “A lot of parts of the game I was really happy with. We made seven changes but we were still really fluent, offensive football, dominant football. We created a finishing situation often enough, it could have been more often. It was a very disciplined performance from the opponent but also disciplined from my side. It was a disciplined performance but just that one goal. This is where we have to improve.”

Klopp, whose approach to buy Southampton’s central defender Virgil van Dijk backfired spectacularly with Liverpool having to apologise to Saints for doing so, said in mitigation his side hadn’t been very lucky.

“A little block here, we miss Arfield, or forget him, and he can score,” said Klopp. “It doesn’t feel good, that’s all I can say but fortune was not wearing a Liverpool shirt today. We made seven changes but still played really fluent so there were a lot of really positive things but yes, we have to improve. Unfortunately, I still don’t feel any positivity in this moment. I’m still in a 1-1 mood.”

Klopp’s frustration was in stark contrast to Dyche who, having seen his team collect just seven points away from home all last season, has now seen them garner five points from their first three away games — tricky visits to Chelsea, Tottenham and Anfield.

“You’ve got to defend well at these places,” said Dyche. “Our game plan wasn’t to come here today and think we’re going to keep the ball all afternoon. It’s not going to happen. But our players are learning about the Premier League. It’s almost subliminal at times. Every year you can stay in the Premier League, you’re more at ease and believe in yourself and the team more and keep moving forward. But we’re not naive. We’ve had a really healthy start but there is still a lot of hard work to be done.”