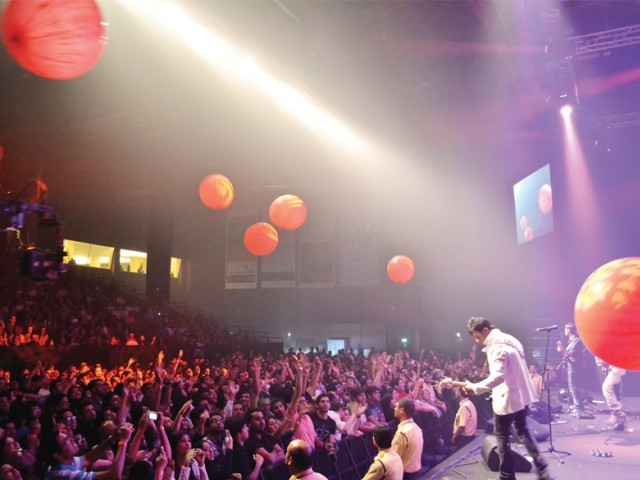 Strings, the duo of Bilal Maqsood and Faisal Kapadia, bedazzled the heaven in the desert, with their exhilarating Umeed concert at the Palladium in Dubai’s Media City on March 25.

The fund-raising event was organised by an NGO called Saharey, which is involved in the development of educational projects in Pakistan. It was Strings’ first gig in Dubai after two years and the band has a good experience of working alongside the NGO for the past three to four years.

It was a night full of rocking music at the Palladium. This venue has played host to mega stars like Bryan Adams and this was the first time that a Pakistani band was performing there. As Strings took charge, a multi-ethnic crowd of several hundred people thronged towards the stage. Ahad Nayani on drums opened up the intro with Adeel Shakir joining him on the bass and Haider on the keyboards. A catchy beat indeed, it turned out to be an extended guitar-fueled opening of “Koi Aanay Wala Hai”. Bilal and Faisal received an astounding welcome as their entry indicated a performance par excellence.

“Najane Kyun” was a solid ballad as ever. Dedicated to the flood victims of 2010, Strings somewhat altered the tone of the song and it was mellow. On “Chaaye Chaaye”, Faisal got the crowd bouncing from the get go. There was an aura of optimism, amidst a crowd singing in unison with the performers. What followed in “Titliyan” was even more attention-grabbing. In the middle of the performance, giant colourful balloons were let in the air symbolising the sense of liberation and positivity which lifted the audience into frenzy. Lethal performances like “Durr”, “Kahani Mohabbat Ki”, “Mera Bicchra Yar”, “Anjane”, “Akhri Alvida”, “Zinda” and “Sohniye” made the audience ecstatic. Faisal is a hypnotic vocalist and no one strums the guitar like Bilal.

The highlight of the evening was when the band returned with separate drums in a choreographed tribal drums percussion theme, where each member beat the drums in an improvised manner. And, this improvisation led to the patriotic number: “Hai Koi Hum Jaisa”. The crowd had gone all crazy by this time. Head-banging, screaming, singing — they offered everything in the book. Strings also emulated a cricket match. Faisal represented the Indian team and Bilal, the Pakistani, with a cricket bat. Bilal would hit the ball into the crowd and when anyone from the crowd caught it, a huge roar was witnessed.  The two-hour long performance came to a halt with “Dhaani” and left the crowd urging for more exhilarating music. The lights and the sound arrangement were par excellence. “For Strings, it was probably one of the best sound and light arrangement amongst all the concerts we’ve ever performed at, throughout our careers,” said Bilal.

When asked about the name of the concert, ‘Umeed’ (hope), Bilal Maqsood remarked: “We feel that God has given us talent and we want to give something back to the country. If someone gains hope, through our music, I feel like we’ve done our job.

Faisal added: “Music is very important for us as it is our job and what we love to do. It’s how we express our feelings and frustrations. From the time of Noorjehan, music has played a part in uplifting people’s spirits and we want to carry the trend as we have been. Even today, when we listen to songs like “Sohni Darti” and “Jeevay Jeevay”, a spirit of patriotism arises in us.”

While one talks of spirit of unity and patriotism, Strings new single, “Main Tau Dekhoonga”, conveys the same message of hope. “Main Tau Dekhoonga’s response has been great. People have told us that it moved them and brought tears to their eyes,” said Strings. “This video is our nation’s voice. People are taking the ownership of this song. We want people to think of this song as their own song, their own anthem and their own voice.”

Paying homage to the queen of folk