Colone­l Ijaz of the Fronti­er Corps says the Mohman­d agency operat­ion is in its last phase.
Published: April 16, 2011
Tweet Email 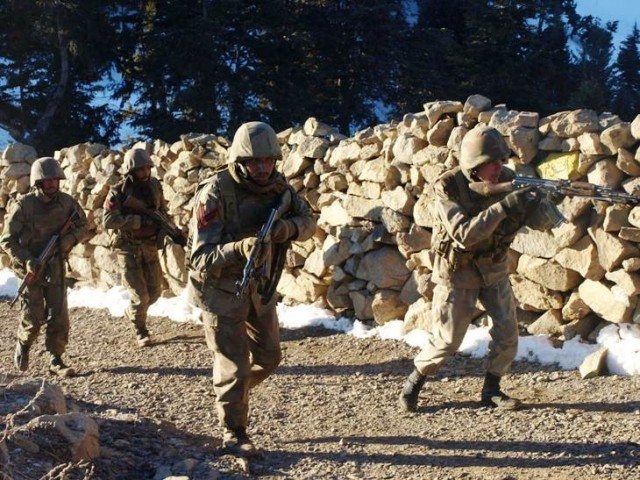 Colonel Ijaz of the Frontier Corps says the Mohmand agency operation is in its last phase. PHOTO: AFP

ISLAMABAD: Colonel Ijaz of the Frontier Corps (FC) informed the Senate Standing Committee on Interior that the Mohmand agency operation is in its last phase, and that around 2,500 terrorists have so far been killed in Fata.

Colonel Ijaz briefed the Standing Committee on Saturday, stating that 169 Pakistan Army personnel and 240 soldiers of the FC have so far been killed in the operation against militants.

He said that 5,578 militants have been injured while 956 militans have been nabbed during operations.

Local troops and paramilitary forces, backed by helicopter gunships and warplanes have been targeting Taliban positions in the Beizai Tehsil of Mohmand Agency over the last few days.

Security forces launched Operation Brekhna (Thunder) on April 6, and have since claimed killing dozens of militants in clashes. However, there have been no independent confirmations of these claims.

Meanwhile, sources also said that large scale displacement was taking place in these areas, where a military operation was ongoing. According to the sources, at least 150 families have reached the Kashmir Kor Internally Displaced Persons (IDPs) Camp. They said that at least 1,600 families have so far taken shelter at this camp to escape the clashes in their areas.