Children of the Emmys: How young stars are taking over this year's awards

Children of the Emmys: How young stars are taking over this year's awards

A notabl­e featur­e of many conten­ders for upcomi­ng Emmys is that they star young actors­
By AFP
Published: September 13, 2017
Tweet Email 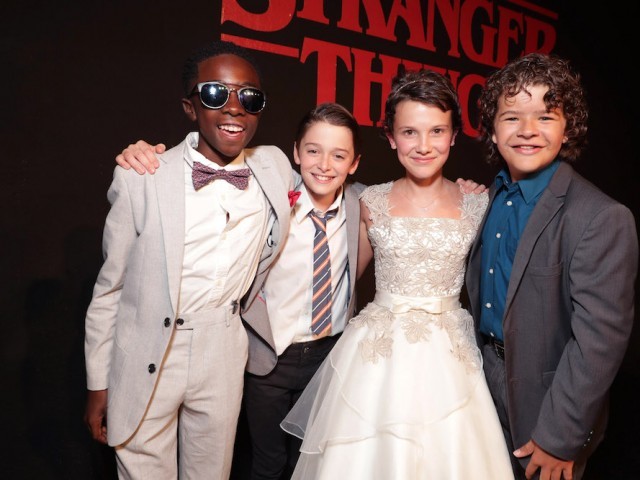 From sci-fi horror series Stranger Things to drama Big Little Lies and sitcom Black-ish, one notable feature of many contenders for this weekend’s Emmy Awards is that they star children.

Unlike the elaborate riders sometimes specified by their adult counterparts, these pint-sized thespians have more mundane requirements – time for homework, regular breaks and the odd afternoon nap, reported AFP.

“They are not trained actors like adults, but the kids that get the roles have an inherent ability,” said casting director Amanda Lenker Doyle, who worked on Black-ish. “They have the charisma, the willingness to dive into a role. They listen well… They’re very smart.”

Child actors sometimes arrive at auditions better prepared than adults and with scripts memorised from top to bottom, despite not yet being able to read. While the maxim “never work with children or animals” is clearly not worth heeding, there are of course challenges to hiring youngsters for TV or film. “With children, I’m dealing with the family dynamics, the family politics. It’s a lot about the parents,” talent manager Jason MacRay said.

MacRay says he will turn a young actor away – even a kid with clear talent – if the parents don’t give off the right vibe. “I can just tell it’ll be a disaster dealing with mum or dad or both, particularly if they don’t agree,” he said.

Another challenge in working with actors who are far from fully mentally developed is getting them to access and express the full range of emotions that they might not yet have experienced in real life.

A successful series director who asked to remain anonymous remembers having filmed with a boy for the role of “a six-year-old who has lost his mother and is living with a father who can’t come to terms with his wife’s death.”

“Pretty heavy stuff, and I was very worried about how I would get across to this boy all of the complex emotional turns that were needed from him,” the director said. “One day, I saw that he was playing with Pokemon cards on set and so I sat down and had him explain who all the characters were. There were a lot of them but by the time he was finished, we were friends… It helped both of us.”

Children are limited in their contracts to about nine hours a day on set, but it’s invariably an intense day. They can be required to start at dawn and, on top of all the usual pressures of acting, they have to find time to squeeze in three hours a day for schooling.

“There’s millions of dollars involved – each minute on the set costs thousands of dollars – then you ask a 10-year-old to behave professionally and be at the level of Tom Cruise,” said MacRay.

The manager said he considers 12 auditions or more a month “too much” for his young clients.

Child actors have to learn to keep their feet on the ground amid the sudden glare of the media spotlight and previously unimaginable wages, which isn’t easy if they have pushy parents trying to live vicariously through their newly famous offspring. For every Leonardo DiCaprio or Natalie Portman who transitions successfully from child star to adult actor, there is a Lindsay Lohan or Macaulay Culkin, who cracks under the pressure or just falls by the wayside.

“It’s about the parents, managers etc being in tune… they need grounding in the family. The teens I work with are very reasonable,” said MacRay.