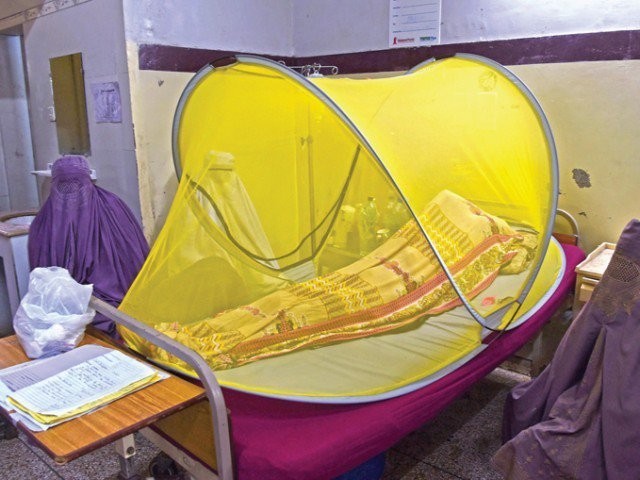 PESHAWAR: The Peshawar High Court (PHC) on Tuesday expressed its dissatisfaction over efforts of the Khyber-Pakhtunkhwa (K-P) government to control an outbreak of the dengue virus in Peshawar and other areas of the province.

While hearing a petition filed by Saifullah Kakakhel on the spread of the virus, a two-member bench of the PHC comprising of Justice Qaiser Khan and Justice Ijaz Anwar, directed the provincial authorities that there was no harm in taking assistance from the Punjab government to counter the mosquito-borne disease since Punjab has technical know-how which can be utilised for public interest.

Noting that the issue was one of public interest, it directed that the matter should not be politicised and assistance should be taken from other provinces to eradicate dengue from the city.

During the third hearing of the case, Kakakhel told the court that the chemical being used in fumigation of various areas of the city and other liquids were expired.

He pointed towards universities in the city where little to no efforts have been made to guard against dengue despite the availability of large quantities of stagnant water.

The lawyer also told the court about the non-availability of blood platelets in hospitals for patients suffering from dengue fever.

The high court expressed its dismay over efforts made by the provincial health department to eliminate the dengue virus and directed them to determine why people of the city are suffering from the viral fever.

Meanwhile, K-P Health Director General Abid Majeed and Peshawar Deputy Commissioner Saqib Aslam explained to the court that there were fewer dengue cases in the city this month when compared to last month – progress owed to efforts of the department.

Aslam told the court that they were continuously fumigating different parts of the city and that their efforts have borne fruit. Moreover, he pointed out that a report by a federal organisation had noted improvement in the city’s situation, appreciating how the K-P government had reduced the number of dengue cases.

The deputy commissioner added that they had even asked health officials of the Punjab government to evaluate their efforts.