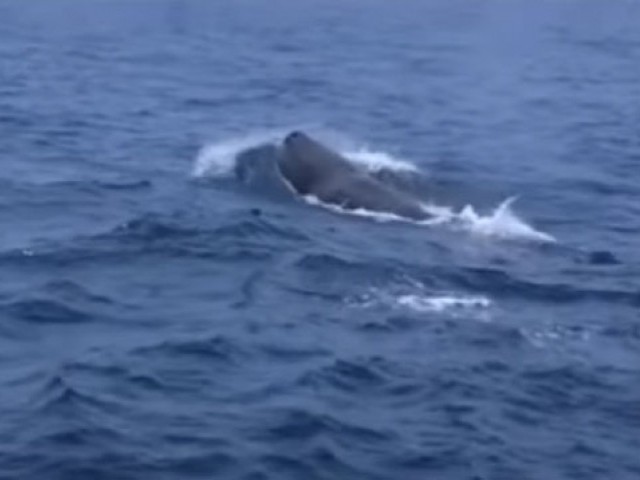 KARACHI: While navigating about 22km south of Gunz, near Jiwani, fishermen led by captain Mehar Gul spotted two whale spouts on Sunday. The fishermen became curious and followed what eventually turned out to be a pair of sperm whales which had never been reported live from Pakistani waters earlier.

The fishermen followed the whales for about one-and-a-half hours after which the pair took a deep dive and disappeared into the sea.
Earlier, the skeleton of a sperm whale was reported from Sonara Beach, near Karachi, in December 2005, whereas a few bones of another specimen were collected from Daran Beach, near Jiwani.

Sperm whales, scientifically known as Physeter macrocephalus, can be easily recognised by their massive heads and prominent rounded foreheads. It is a cosmopolitan species, which is globally found in all major oceans.

These whales are considered the largest predator and feed on a variety of fishes and invertebrates. However, 80 per cent of their diet consists of large squids. Sperm whales have the largest brain of any creature known to have lived on Earth.

World Wide Fund for Nature-Pakistan Technical Adviser Moazzam Khan appreciated the efforts of Mehar Gul who followed the sperm whales and recorded them on camera. “The dive pattern and terminal blow confirms that the two whales are adults as their size exceeds 10 metres,” he added.

Sperm whales’ heads also hold large quantities of a substance called spermaceti. Whalers once believed that the oily fluid was sperm, but scientists still do not understand its function. One common theory is that the fluid, which hardens to wax when cold, helps the whale alter its buoyancy so that it can dive deep and rise again.

Sperm whales are known to dive as deep as 3,280 feet in search of squid. These giant mammals can hold their breath for up to 90 minutes on such dives.

The WWF-Pakistan has trained more than 100 fishermen, mainly skippers, to collect information about fish catch as well as by-catch, especially of mega fauna (whales, dolphins, whale sharks and mobulid rays). Fishermen are also trained to safely release rare marine species that are incidentally entangled in their nets and collect information about free-swimming whales and dolphins.

During post-monsoon months last year, from August to December, trained fishermen sighted an unprecedented number of baleen whales along Pakistan’s coast. A total of 47 sightings of baleen whales, including 12 confirmed sightings of Arabian humpback whales and three of Bryde’s whales were recorded.

Dr Babar Khan, the Regional Head for Sindh and Balochistan of the WWF-Pakistan, lauded the fishermen for reporting the first live record of sperm whales in Pakistani waters and termed the sighting an important addition to the knowledge of biodiversity of the Arabian Sea.

He said 23 species of whales, dolphins and porpoises were known to occur in Pakistani waters. This sighting of sperm whales indicated the rich diversity of marine life along the coast of Pakistan, he added.
He also emphasised the need to implement a Cetacean Conservation Strategy, developed by WWF-Pakistan and other stakeholders in 2013 to protect whales and other cetaceans in Pakistani waters.

Moazzam Khan, the WWF-Pakistan Technical Adviser on Marine Fisheries, said the Arabian Sea was known to have a large population of oceanic squids, including rhomboid and purpleback flying squid, and it was likely that the sperm whale could dwell in it, as 80pc of its diet consisted of large pelagic squids.