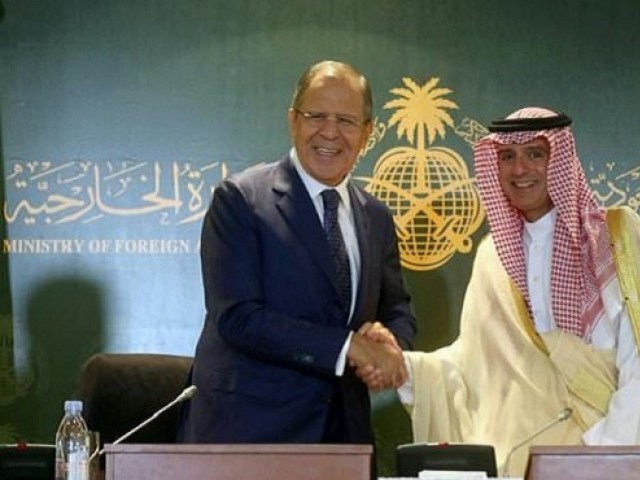 JEDDAH: Saudi Arabia said Sunday it would keep pressuring Qatar until demands by a bloc of Arab states are met, dampening hopes for a US-mediated resolution to a diplomatic crisis.

“We will continue to take action and we will maintain our position until Qatar responds,” Saudi Foreign Minister Adel al-Jubeir said, speaking alongside his Russian counterpart Sergei Lavrov in the Saudi city of Jeddah.

The bloc’s 13 demands include Doha ending its alleged support for extremist groups, closing a Turkish military base in the emirate and downgrading diplomatic ties with Tehran.

Qatar “must respond to these requests in order to open a new page,” Jubeir said.

The Saudi move came just two days after US President Donald Trump spoke with the leaders of Saudi Arabia and Qatar in a bid to mediate.
Trump said he believed the dispute could be solved “fairly easily”.
The Saudi and Qatari rulers spoke by phone on Saturday, raising hope for talks.

But Riyadh later suspended the dialogue, accusing Doha of distorting facts by wrongly implying that Saudi Arabia had initiated the outreach.

A United Arab Emirates minister late Saturday voiced support for the Saudi decision on Twitter, accusing Qatar of “wasting an opportunity” to resolve the crisis.

“I hope that Doha will stop manoeuvring… and act transparently. There is no other way,” state minister for foreign affairs Anwar Gargash said on his official Twitter account.

Saudi Arabia led the UAE, Egypt and Bahrain in cutting ties with Qatar in June, accusing it of bankrolling extremist groups and of being too close to Riyadh’s regional arch-rival Tehran. Doha denies the accusations.

Qatar and Saudi Arabia are both key US allies. Doha hosts a major US air base, home to the headquarters of Centcom — the regional command which leads operations against the Islamic State jihadist group.

Qatar’s emir, Sheikh Tamim bin Hamid al-Thani is set to meet German Chancellor Angela Merkel for talks on September 15, in what will be his first trip to a western capital since the crisis began.

With one voice: OIC condemns ‘brutal acts’ in Myanmar