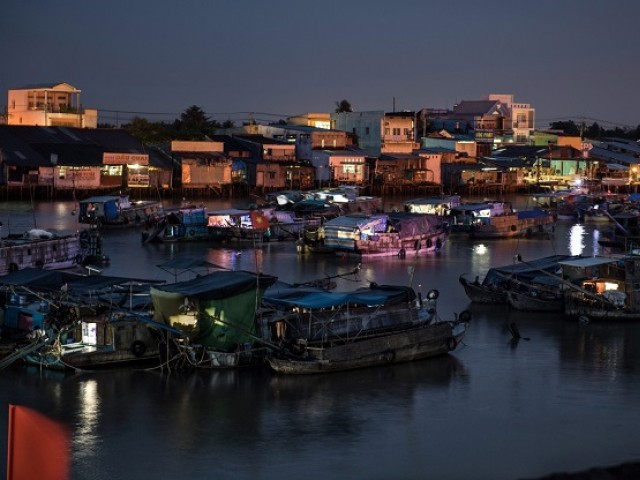 Boats lie anchored in a canal off the Song Hau river in the floating Cai Rang market in Can Tho, a small city of the Mekong Delta. PHOTO: AFP

CAN THO, VIETNAM: Fixing weighing scales used to be good business on Vietnam’s floating Cai Rang market, but the last repairman on the river now makes just a few dollars a month as modernity pushes traders to land.

Surrounded by dusty old scales on his cluttered houseboat, Nguyen Van Ut says vendors are giving up their boats for better lives on terra firma where supermarkets draw the traders who once thronged the waterway.

“I don’t have many customers now. In the past, it was alright, but now many boats have left the floating market… people on vessels have switched to vehicles,” the 71-year-old told AFP.

He got into the repairs business 30 years ago on the Can Tho river to support his surviving children after his wife and two of his sons drowned in an accident. For a time life was good, but now he relies on handouts from his children – three of them work in nearby Can Tho city.

Once reportedly two kilo metres long, the Cai Rang market is a shadow of its former self. There are about 300 boats on the water now, down from 550 in 2005, according to the local tourism office.
It has fallen victim to the economic rise of the Mekong Delta, which has rapidly developed over the last decade.

Industrial and construction sectors have created nearly 570,000 jobs, hauling many from poverty. But people like Ut have been left behind, unable to afford a life on shore. 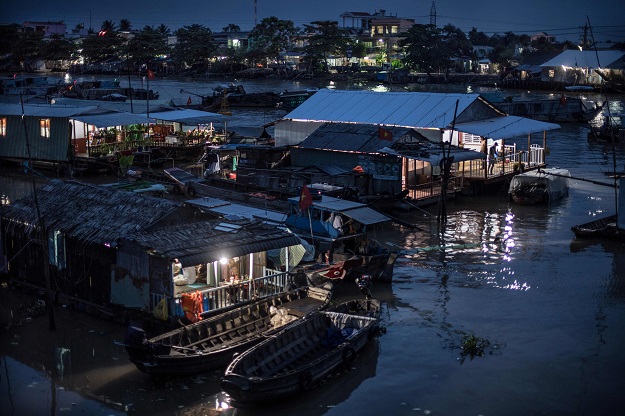 A man living on a boat in a canal off the Song Hau river at the floating Cai Rang market looks out from the porch of his home in Can Tho, a small city in the Mekong Delta. PHOTO: AFP

Even vendors making a decent wage from the tourists who flock to the market yearn for the perks of living on land: better housing, better jobs and modern amenities.

Nguyen Thi Hong Tuoi started working on the water when she was a child, just like her mother and grandmother before her. Though she earns decent money, she doesn’t expect her daughter to carry on the family tradition.

“In the future, I will let my daughter live on land so she can study and have a proper job,” the 34-year-old told AFP, as her elderly mother rested in a hammock surrounded by sacks of tapioca on their boat.

It’s a common aspiration for young people in Vietnam, where more than half the country’s 93 million people are under the age of 30 and eager to move to fast-growing cities for work. 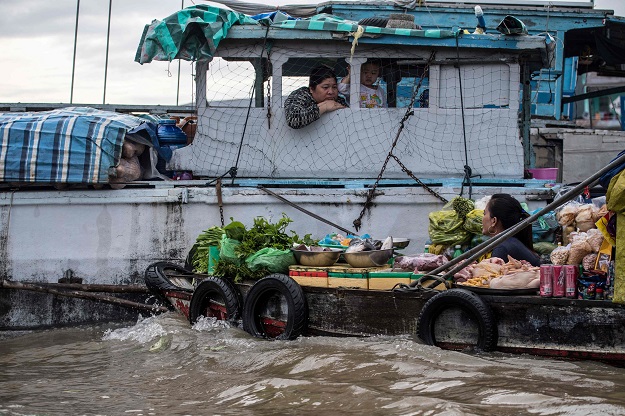 A boat vendor offers her vegetables to a house boat resident in a canal off the Song Hau river in the floating Cai Rang market in Can Tho, a small city of the Mekong Delta. PHOTO: AFP

The origins of Cai Rang market reach back to when Vietnam and neighbouring Cambodia and Laos were occupied by the French, who readily exploited the natural resources of the colony previously called Indochina.

The Mekong Delta’s web of canals – both natural and man-made – were used to transport goods and people in the absence of a reliable road network. There are about a dozen surviving markets in Vietnam’s Mekong Delta today, though like Cai Rang, many have shrivelled.

“The local government is trying to keep the floating markets alive to (preserve) the culture and attract more tourists,” said Nguyen Thi Huynh Phuong, a lecturer at nearby Can Tho University who has researched the market’s history. 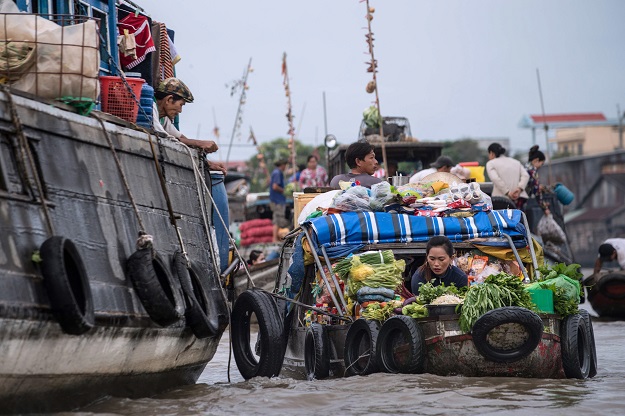 A vendor (R) prepares vegetables that she sold to a resident of a house boat in a canal off the Song Hau river in the floating Cai Rang market in Can Tho, a small city of the Mekong Delta. PHOTO: AFP

It still functions as a wholesale market, with vendors waking each day before dawn to load boats with watermelons or radishes and advertising their products by spearing them to a bamboo pole on the bow of the ship.

But its charm also draws millions of visitors each year who buy noodles, fruit and coffee from water traders, making it a well-established pit-stop on the Mekong tourist trail.

Recognising the market as a tourism hotspot, the government designated Cai Rang as a national heritage site last year.

For vendors like Ly Hung, who has lived on the water for 26 years, visitors have helped to maintain a traditional way of life. “Without tourism this floating market would disappear,” he said.

India calls on Myanmar to act with restraint in Rakhine