More than 8,000 police­men will be on securi­ty duty at Gaddaf­i Stadiu­m
By Our Correspondent / Photo: Abid Nawaz
Published: September 10, 2017
Tweet Email 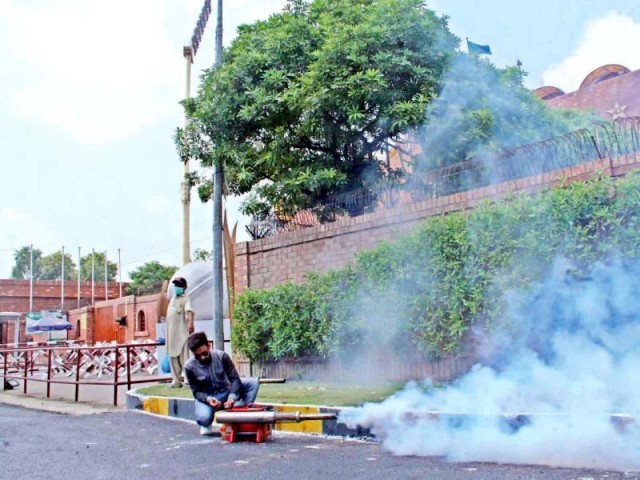 Dengue spray is being carried out outside the Gaddafi Stadium. PHOTO: ABID NAWAZ: EXPRESS

LAHORE: Lahore police have finalised a fool-proof security plan for World XI series, starting from September 12, in the city.  The International Cricket Council (ICC) security consultants also reviewed the arrangements and appreciated the efforts of the Lahore police.

Punjab Safe City Authority (PSCA) Managing Director Amir Malik told the media on Saturday that the security plan would be a replication of the final match of Pakistan Super League’s (PSL) security arrangements held in March this year.

More than 8,000 policemen will be deployed on a security duty at the Gaddafi Stadium that has a capacity of 24,000 spectators.

Rangers and army personnel will also assist police in maintaining a five-layered security during the match. On Friday, Punjab IGP Arif Nawaz approved a request from Lahore police for more officers. Approximately 10 police officers, including District Police Officers (DPOs), from different cities of the province have also been called to assist Lahore police.

The PSCA has installed 217 CCTV cameras on 70 to 75 poles, both inside and outside the stadium along the route of the team for live monitoring.

In addition, CCTV cameras have also been installed on the roof of the vehicles. Two special commandant mobile vehicles of the PSCA will also be on patrol around the Gaddafi Stadium. According to the plan, SPs will be given 4-G wireless handsets. These wireless sets can be used for live video-streaming of a spot.

According to the security plan, motorcade of the teams will be monitored live by the CCTV cameras installed on poles of PSCA and the vehicles that would be moving along with the route. At hotels, six-layered security arrangements will be in place.

There will be zero-traffic on the route during movement of the team. The roads leading towards the route will be cordoned off prior to their movement. Officials of flying squad will be deputed all the way along the route for security and keeping an eye on suspicious persons or activity.

The Gaddafi Stadium will be sealed with barbed wires and tents at a radius of one kilometre on all sides. Only those who will be carrying match tickets will be allowed to enter.