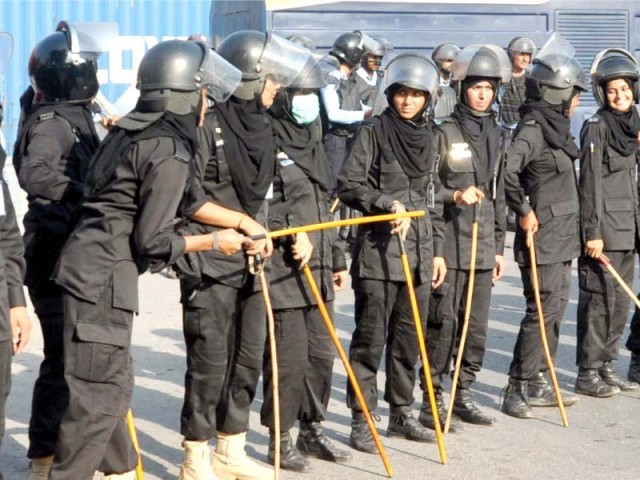 ISLAMABAD: The wave of protesters marching towards the Myanmar Embassy in the capital were ultimately no match for Islamabad’s finest who successfully managed to keep the peaceful protesters from entering the Red Zone on Friday.

The security arrangements and rallies, though, caused a massive log jam of commuters on the streets of the capital.

The Jamaat-e-Islami had organised the largest rally in the capital to protest against the brutalities faced by the Rohingya Muslims who are fleeing violence in Myanmar by the thousands.

But the party, which has in the past drawn crowds in anti-drone protests, could only muster a few thousand supporters who posed little threat to the contingents of Islamabad Police and a wall of shipping containers blocking their path.

The JI supporters were also joined by hundreds of supporters of the Ahle Sunnat Wal Jamaat (ASWJ), led by its Punjab MPA Masroor Jhangvi.

However law-enforcement personnel, including contingents of male and female cops of the Islamabad Police, the Punjab Police, and the Frontier Constabulary, decked out in riot gear, outnumbered the protesters.

Nonetheless, the authorities had made sure that no one could enter the high-security Red Zone or approach the Diplomatic Enclave.

The main entrances to the Red Zone had been sealed early on Friday morning. Containers had been placed on Serena Chowk, NADRA Chowk, Marriott Chowk as well as D-Chowk. Additionally, thousands of law-enforcers were deployed to check those entering the Red Zone.

However, the authorities allowed the combined rally of JI and ASWJ to march from Aabpara Chowk to Serena Hotel where the police had put up over a dozen containers, mounted by gun-toting policemen. 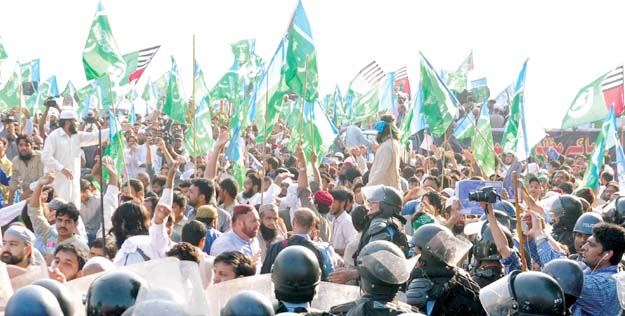 JI, which had announced that it would surround the Myanmar Embassy, made no attempt to breach the Red Zone. While some of its members clambered over the containers, none were brave enough to test the resolve of security officials.

JI leaders in their speeches too noted that they were not there to clash with officials and that the country had already suffered enough bloodshed and violence.

After their leaders completed their speeches, the protesters peacefully dispersed but not before making a vow to return unless atrocities against the Muslims in Myanmar stop.

Thousands of commuters in the capital were caught between protesters and authorities on Friday.

The situation was exacerbated because public transport remained thin. Moreover, many roads in the Aabpara area remained blocked.

Government employees, whose workplaces are located inside the Red Zone also faced difficulties in reaching their offices and after work, leaving for home since all entrances and exits to the Red Zone had been blocked.

Interior Minister Ahsan Iqbal on Friday urged protesters to maintain the sanctity of the Red Zone in Islamabad since any chaos in the area would damage Pakistan’s international image.

In a statement, he expressed solidarity with the Muslims of Myanmar, noting that it was a national obligation.

However, he said that violence should be avoided while taking out rallies and that it was a national responsibility to provide security to diplomats.

(WITH ADDITIONAL INPUT FROM OUR CORRESPONDENT)