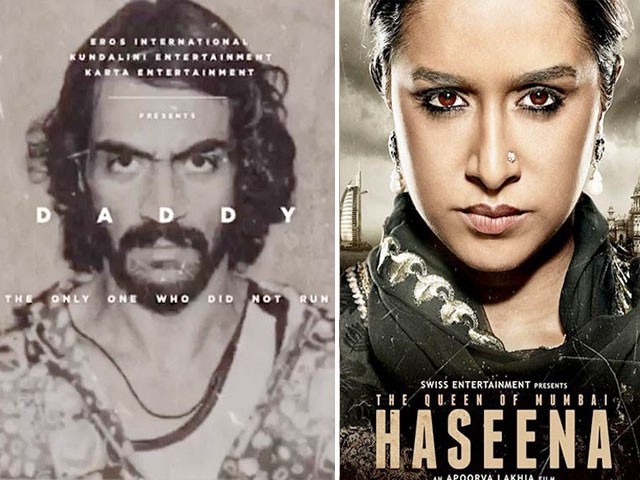 A movie about the life of a notorious Mumbai mafia don comes out in Indian cinemas this week as Bollywood steps up its long-held fascination with the financial capital’s criminal underworld.

Daddy, a biopic on gangster-turned-politician Arun Gawli, hits screens Friday before the release later this month of a film about the infamous sister of Dawood Ibrahim, India’s most wanted man.

I wanted to venture into new kind of films: Shraddha Kapoor on ‘Haseena’

For Daddy director Ashim Ahluwalia, making a film about a former mafia boss currently serving life in prison for the murder of a local Councillor was a little intimidating.

“It is, but Gawli is an older man now, past his prime and we have made the film with his family’s consent. I wouldn’t have done it otherwise,” he told AFP.

“I think he feels he has done his time and that his family has suffered enough. We had to have the Gawli family’s trust. And we assured them that we would not misrepresent.

“However there are others in the film whose consent we did not have and we have thinly disguised some of them, such as a few of the politicians.

“Getting threats is an inevitable part of working on a subject like this,” he added.

The film, which takes its title from Gawli’s nickname, charts his life through the 1980s and ’90s from mill worker to gangster, to kingpin of Mumbai’s Dagdi Chawl-based gang to state politician.

His gang was engaged in a brutal war with Ibrahim’s notorious D-Company for many years.

Gawli faced numerous criminal charges but none stuck until he was found guilty in August 2012 of involvement in the murder of local Shiv Sena party politician Kamlakar Jamsandekar four years earlier.

When Shraddha Kapoor was juggling between ‘two worlds’

The 62-year-old is in jail in Nagpur, central India.

“We met him several times and one of the first things I noticed about him is how he doesn’t speak much. He’s rather opaque,” said Ahluwalia.

“(But he) did suggest iterations on the script which were made in consultation with his lawyers because several cases are still pending in the courts.”

The film-makers say they made a concerted effort not to glorify Gawli.

“We are not trying to promote this lifestyle or this world. We have tried to make a movie that is authentic and entertaining,” Rampal told AFP.

I was keen to learn about my roots: Farhan Akhtar

Ahluwalia said the film tells Gawli’s story from several points of view, including from his wife, a rival gang member, and the police.

“This allows the audience to pick which version they want to accept,” he explained.

The movie continues a lengthy fascination that Bollywood has had with Mumbai’s underworld.

In the 1970s veteran superstar Amitabh Bachchan made his name playing a number of angry young men involved in nefarious activities such as Deewar and Don.

Shraddha Kapoor’s new avatar will blow you away

On September 22, Haseena, directed by Apoorva Lakhia and about the life of Ibrahim’s sister Haseena Parkar, releases in India.

Actor Shraddha Kapoor plays the central character who became known as the “Queen of Mumbai” for her role in running Ibrahim’s operations after he fled India following the 1993 Bombay bomb blasts.

Connections between Bollywood and gangsters ran deep in the ’80s and ’90s when the film industry depended on the criminal underworld for funding.

Before he left India Ibrahim was often photographed with various Bollywood stars at social events, underlining the closeness between the extortions and violence depicted on screen and those carried out in real life.

Shraddha Kapoor’s terrific transformation in ‘Haseena’ will leave you stunned!

Lakhia told AFP he made Haseena because he wanted to explore why people become criminals. For Ahluwalia gangster movies’ enduring appeal is their escapism.

“These characters act out things that normal everyday people don’t or can’t do. I think that anarchy and being outside the law is a kind of wish fulfilment for some viewers,” he said.