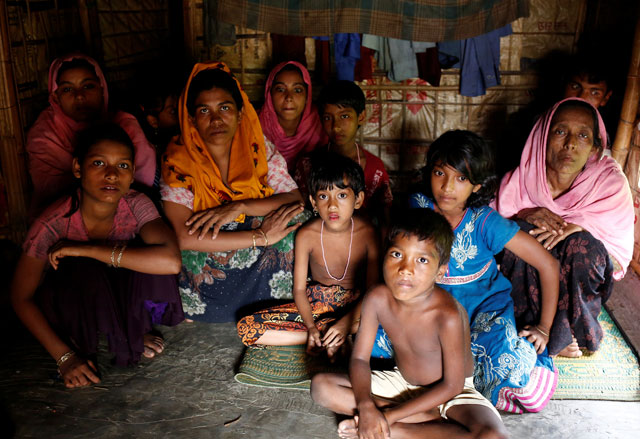 BAHAWALPUR: A large number of journalists, members of Civil Society Network and political workers on Tuesday participated in a protest demonstration outside the Bahawalpur Press Club to express solidarity with the oppressed Muslims of Burma.

While addressing the protesters, Bahawalpur Press Club President Junaid Nazir, Civil Society Network’s Syed Israr Shah, Jamshed Karim, Asiya Kamil and others expressed great concern on the situation of Rohingya Muslims where thousands of whom have been killed. They condemned atrocities and violence against Rohingya Muslims.

The participants also condemned the silence of United Nations, world community and especially Muslim countries. They said the violence against Muslims was nothing short of a disaster. The participants demanded that only passing a resolution in the National Assembly was not enough and the government must raise this issue of Burma on international level by the Pakistan government. They also demanded immediate closure of Pakistan’s embassy in Burma.

Nazir said more than 90,000 Muslims have migrated due to the atrocities of Myanmar army and Buddhist extremists. “Hundreds of Muslim villages have been set on fire. There is no one to take notice of violence and atrocities against the Rohingya Muslims and day by day the incidents of violence are increasing. At least 20,000 Muslims of Rohingya are present at Bangladesh’s border. They are not being allowed to enter Bangladesh while India is also adamant and not allowing these Muslims to enter the country,” he said.

Stressing the unity of the Muslim world, the protestors said non-Muslim powers were bent upon eliminating Muslims and to fight them back; Muslims have to stand together united. Syed Israr Shah said the Muslim world was like one body. If one part of it gets wounded, the whole body feels the pain. The protestors stressed Muslim countries to make OIC functional to counter the threats and conspiracies against Muslims around the world. They also demanded that the government must play its role in highlighting the issues of Muslims.

Meanwhile, on the call of Punjab Bar Council, the lawyers’ fraternity across Sargodha district observed a full-day strike on Tuesday to express solidarity with Rohingya Muslims in Burma. Mourning the brutal violence against Rohingya Muslims, Punjab Bar Association (PBA) called on counsels to register their protest against the suppression of Muslims. Black flags were also hoisted on the court rooms.

The lawyers, led by PBA President Rao Fazalur Rehman and Secretary Waseem Saleem, urged Muslim community to secure the lives of Rohingya Muslims and ensure their protection. A complete strike was also observed at all the tehsil courts of the district.

Meanwhile, in Multan, All Pakistan Anjuman-e-Tajran Chairman Khawaja Suleman Siddique strongly condemned the atrocities against Rohingya Muslims and demanded that international community should take notice of the situation.

In a statement issued on Tuesday, Suleman Siddique said United Nations (UN) and Organisation of Islamic Countries (OIC) should play effective role for stopping these atrocities against innocent Muslims. He also condemned silence of human rights organisations over this issue.