Afghan Taliban leaders are in Quetta and Peshawar: Gen Nicholson

Afghan Taliban leaders are in Quetta and Peshawar: Gen Nicholson 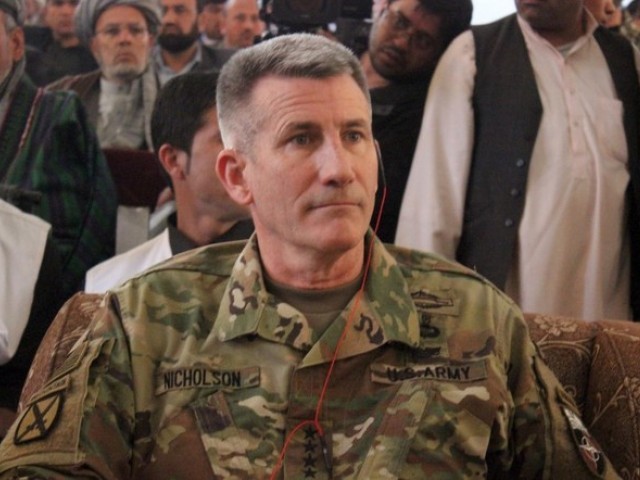 The commander of US and NATO forces in Afghanistan General John W. Nicholson sits during his visits from Kunduz province, Afghanistan. PHOTO: REUTERS

US top military commander in Afghanistan said the Trump administration is “aware of presence of the Afghan Taliban leadership in Quetta and Peshawar”.

In an interview with TOLO news, Commander for US Forces and Nato in Afghanistan General John W Nicholson said he is “primarily focused on activities inside Afghanistan” but the issue of ‘sanctuaries’ was being addressed in ‘private’ between Pakistan and US governments.

“The Quetta Shura, Peshawar Shura – these shuras are identified by cities inside Pakistan, we know Afghan Taliban leaders are in these areas,” he said, adding, “Support for terrorists and insurgents has to be reduced, has to be stopped.”

US President Donald Trump lashed out at Pakistan while unveiling his new Afghanistan strategy recently.

He accused Islamabad of playing a double game as it accepted American aid but gave safe haven to insurgents who kill Afghan and NATO troops. “We have been paying Pakistan billions and billions of dollars at the same time they are housing the very terrorists that we are fighting.”

The US commander reiterated support for Washington’s new policy in the region. The policy, based on fulfilment of conditions, gave the military “additional capabilities”, he said. “We have a direction now provided by the US policy that is being supported by NATO.”

In dealing with Trump, Pakistan plays its trump card

Dwelling on the security situation in Afghanistan, the military general said the US will keep increasing pressure on Taliban inside and outside the country. “It is our mandate to put military pressure on Taliban,” he said, adding, “Taliban need to know they cannot win militarily.”

The commander did not rule out a diplomatic solution but revealed that the US will work with Afghan authorities to increase its military capabilities.

On the issue of general security in the war-torn country, Gen Nicholson said the “civilian casualties is a real tragedy”.

Talking about the Taliban main source of income, the American general said: “We know the Taliban receives the majority of its financing from narcotics traffic,” he said, adding that the organisation has become a group that brings  misery and hardship to the people.

Gen Nicholson made it clear that the US and Nato stand by the Afghan security forces against terrorists and enemies of Afghanistan, saying the Taliban cannot win on the battlefield. “It’s time for them to join the peace process.”

Trump’s Afghan strategy: Key US official postpones her visit till next week