Five transg­ender women in the US milita­ry are suing Trump and the Pentag­on over the tweets­
By AFP
Published: August 26, 2017
Tweet Email 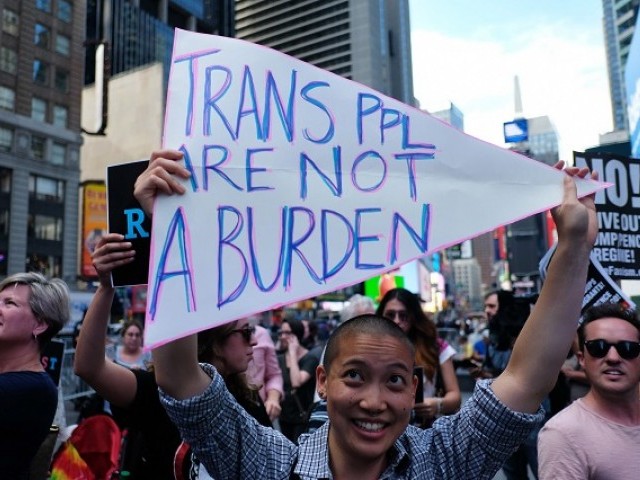 This file photo taken on July 26, 2017 shows protesters against US President Donald Trump during a demonstration in front of the US Army career center in Times Square, New York. Trump on August 25, 2017, signed a memo effectively barring transgender people from joining the US military, but left the fate of those already serving up to the Pentagon PHOTO: AFP

WASHINGTON DC: President Donald Trump on Friday signed a memo effectively barring transgender people from joining the US military, but left the fate of those already serving up to the Pentagon.

In a widely anticipated move, Trump directed the military “to return to the longstanding policy and practice on military service by transgender individuals prior to June 2016” – to go into effect from March 23, 2018. That means an effective ban on new openly transgender personnel and on payment for treatment for those already in the armed forces, aides said.

The memorandum calls on Defense Secretary Jim Mattis and homeland security chiefs to submit an implementation plan by mid-February, and granted Mattis broad discretion what to do about currently serving transgender personnel. Trump did leave open the possibility that Mattis, in conjunction with the homeland security chief, could advise “at any time, in writing, that a change to this policy is warranted.”

Last month, Trump deployed a series of tweets that called into question an Obama-era policy of allowing transgender troops to serve openly. The tweets came with little apparent coordination with the Pentagon, resulting in speculation about the fate of between 1,320 and 15,000 transgender personnel already serving. Several senior military officials had voiced unease over the policy shift, with the head of the Coast Guard, Admiral Paul Zukunft, saying he would not “break faith” with transgender personnel.

Zukunft said there were 13 Coast Guard members who have come out as transgender, noting “all of them are doing meaningful Coast Guard work today.” A day after the president’s initial announcement, General Joe Dunford, the Chairman of the Joint Chiefs of Staff, sent a short memo to senior officers and enlisted leaders that the current policy should remain in effect until Trump gives formal direction to the Pentagon and Mattis issues new guidance.

“In the meantime, we will continue to treat all of our personnel with respect,” Dunford wrote. Trump drew criticism from a number of lawmakers for releasing the memo as the US Gulf Coast braced for a dangerous hurricane. Democratic Senate minority leader Chuck Schumer accused Trump of “using the cover of the storm” to “ban courageous transgender men and women from serving our nation’s Armed Forces.”

“So sad, so weak,” Schumer added, appropriating some of Trump’s favorite adjectives. Democratic House Minority Leader Nancy Pelosi echoed that sentiment, called Trump’s decision ‘cruel.’ “The Commander-in-Chief is ordering the Pentagon to hurt and humiliate thousands of Americans who serve in our military with strength and courage,” Pelosi said. “Prejudice, not the national defense, is behind President Trump’s cruel decision to kick transgender troops out of the military.”

Five transgender women in the US military are suing Trump and the Pentagon over the tweets, saying they faced uncertainty about their futures, including whether they would be fired or lose post-military and retirement benefits. Trump has said he did the Pentagon a “great favor” by banning transgender troops, saying the issue had been ‘complicated’ and ‘confusing’ for the military. In the directive, he suggested Obama had not thought through whether the policy would “hinder military effectiveness and lethality, (or) disrupt unit cohesion.”