PBC slams the reference that never was

PBC slams the reference that never was 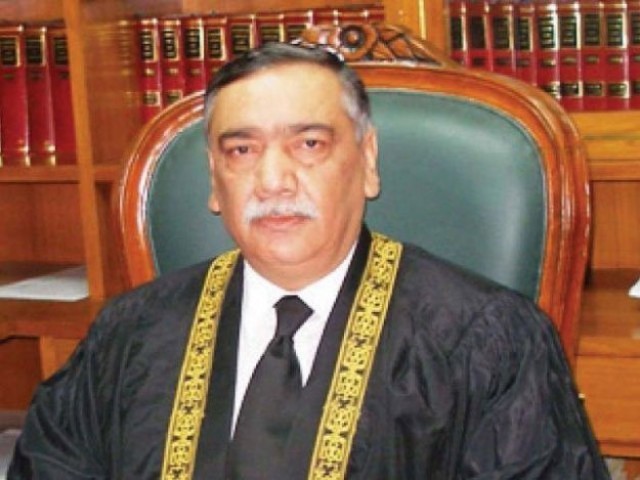 ISLAMABAD: It seems the controversy surrounding the ‘mysterious’ reference against Supreme Court Justice Asif Saeed Khosa is not likely to die down anytime soon. The Pakistan Bar Council has now claimed that the National Assembly speaker was about to file a complaint against the judge, but almost immediately recalled his secretary, who was tasked with filing it.

PBC Vice Chairman Muhammad Ahsan Bhoon, on behalf of the legal fraternity, has issued a statement claiming that the Speaker Ayaz Sadiq initially had the reference filed but withdrew it after learning of the consequences of filing a frivolous reference against a judge of the superior court. Talking to The Express Tribune, he confirmed that the NA secretary came to the Supreme Court to file a complaint with the Supreme Judicial Council but then left without actually filing it.

“We have accurate information that the NA secretary came to file a reference, but after realising the adverse consequence of filing it, he took away the draft “, says the PBC vice chairman.

A four-page draft of a reference against Justice Khosa, the head of the five-member bench that disqualified former Prime Minister Nawaz Sharif, was first aired on a private TV channel and later on other media outlets.

No one from the office of NA Speaker Ayaz Sadiq clarified it for hours and even Prime Minister Shahid Khaqan Abbasi did not explicitly deny it when confronted by the media in Quetta.

Much later that day, Attorney General Ashtar Ausaf Ali said no reference had been filed against Justice Khosa.

Likewise, PBC Vice Chairman Ahsan Bhoon and the executive committee chairman took strong exception to motivated move of the ruling party with regard to the reference against an SC judge, which they felt was an attempt to pressurise the judiciary.

Both PBC representatives warned the “people behind the ill-advised move” to refrain from resorting to targeting the judiciary in an attempt to frustrate the possible outcomes of criminal cases being initiated by NAB courts.

Imran calls for Sadiq’s resignation over ‘reference’ against top judge

“It is highly condemnable that the ousted prime minister, his children, and close family members instead of facing trial in NAB courts over the money laundering charges against them, have started, through their cronies, using illegal tactics to pressurise the judiciary to sabotage the process of accountability initiated against them as a result of the historic judgment of the Supreme Court in the Panama Leaks case against them”, says the statement.

The PBC vice chairman and executive committee chairman also announced that any move to pressurise the judges or the judiciary as an institution would be considered a hindrance in the process of dispensation of justice and would be opposed by the legal fraternity with full force to safeguard the rule of law and the independence of the judiciary.