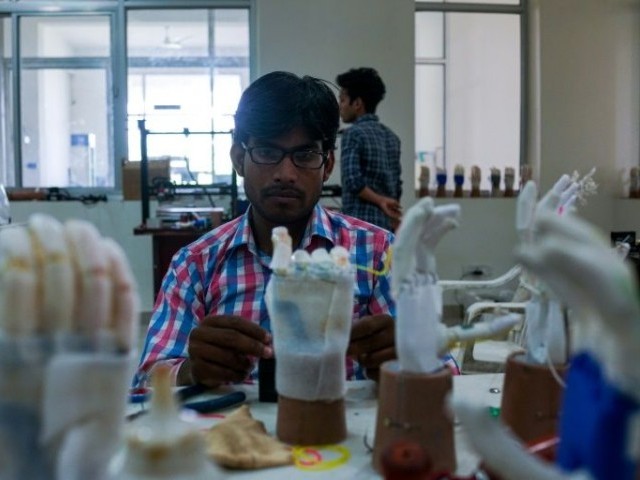 In this photograph taken on June 13, 2017, a technician adds a battery to prosthetic hands at the Bhagwan Mahaveer Viklang Sahayata Samiti non-profit organisation's main branch in Jaipur. PHOTO: AFP

JAIPUR: Vishnu Kumar had barely reached adulthood when he lost his limbs in a freak electrical accident, seemingly condemning him to the life of penury endured by millions of amputees in India.

A year later, the 22-year-old is preparing to walk again with the aide of a “Jaipur Foot” – a no-frills prosthetic made locally. These prosthetics allow amputees to work in muddy fields, sit cross-legged on the floor and comfortably use Indian-style squat toilets without needing to remove the limb.

The manufacturers can churn out 50 prosthesis a day from a simple workshop in Rajasthan and, thanks to donations, fit them for free.
An estimated 10 million Indians live with some form of movement impairment according to government figures. It is common to see amputees begging at traffic stops or dragging themselves about on wheeled carts.

With leg in hand, amputee’s family fights for justice

Kumar, who worked as an electrician, feared he would endure a similar fate after his limbs were blown off in a catastrophic accident involving a high-tension wire. Just a fraction of those maimed in accidents have access to artificial limbs or other aides.

“I was devastated thinking I will have to spend the rest of my life on crutches,” said Kumar, fighting back tears as he waited for a fitting at Bhagwan Mahaveer Viklang Sahayata Samiti, the charity behind the unique design. “These limbs have given me new hope.”

Prostheses cost thousands of dollars and take weeks to manufacture in many parts of the world, but for 50 years the creators of the “Jaipur Foot” have been making dozens of limbs a day for roughly US$60 apiece.

“The technology we use is such that the limb can be made very, very quickly,” said Devendra Raj Mehta, the 80-year-old founder of charity behind the ‘Jaipur Foot’. Mehta credits frugal engineering for the success of the design and its proliferation across India.

Made from durable plastic piping the limb – available for above and below knee amputees – requires little maintenance and can be fitted in hours. Wearers can leave the clinic able to run, swim, climb trees and ride a bicycle, Mehta said.

A unique design allows movement in the ankle and unlike models elsewhere they can be worn without shoes – a huge plus in a region where everyone goes barefoot in kitchens and temples or mosques.

As the prosthesis endures wear and tear, or the shape of the leg changes over time, new fittings can be arranged quickly and free of charge.

“I am getting my fourth leg and I didn’t have to spend a penny. It’s just like getting an all new gumboot,” said 50-year-old Rajkumar Saini, who lost his leg in a road accident 13 years ago.

The design has been so successful that it has found its way abroad, assisting amputees in countries from Africa and Asia to the Pacific Islands.

More than than 25,000 artificial limbs and other aides have distributed worldwide since Mehta’s charity first rolled the Jaipur Foot off the assembly line in 1975. It is now branching into more advanced technology.

One of its most successful new creations is a self-lubricating, oil-filled nylon knee replacement that can be manufactured for $20, a mere fraction of the $10,000 charged for models elsewhere in the world.

Created in collaboration with Stanford University in the US, the artificial knee is considered so cost effective it was named one of 50 best inventions in the world by Time magazine.

The advent of 3-D printing has opened new possibilities, too. The charity has teamed up with a 24-year-old Indian engineer Prashant Gade to print inexpensive artificial hands using the revolutionary printing technology he was gifted at an MIT conference.

Funding remains a constant challenge, but Mehta was confident his thrifty operation would continue to reach those in desperate need. “I strongly believe that even if one percent of people in this country or in the world are compassionate, we shall survive.”