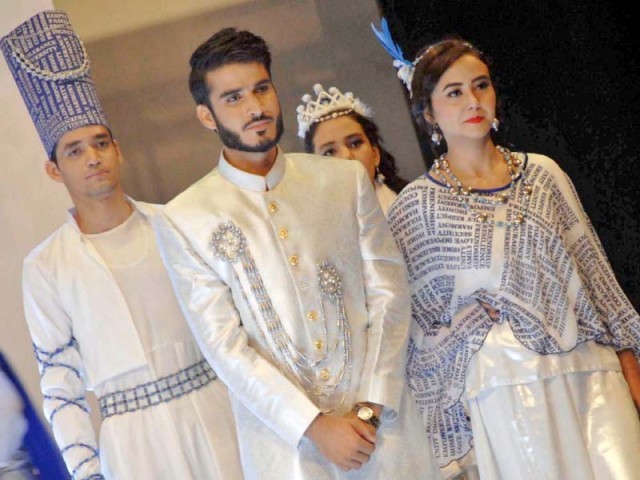 A foreign guest dances to a local tune while models present creations at the Rangoona Festival. PHOTO: ONLINE

ISLAMABAD: A colourful event of diverse display of fashion and music celebrated independence days of Pakistan and Afghanistan falling on August 14 and 19 respectively.

The United Nations High Commissioner for Refugees (UNHCR) and the Embassy of Brazil organised the ‘Rangoona Festival’ in connection with the independence days of Pakistan and Afghanistan.

The name ‘Rangoona’ or colours in Pashto was chosen to mark the diversity of the region in terms languages and traditions.

The occasion particularly acknowledged the hospitality Pakistan has shown in hosting the Afghan refugees.

Speakers hailed the role Pakistani people and successive governments in hosting the huge refugee population since the last four decades.

An official of Ministry of States and Frontier Region (SAFRON) Irshad Mirza said that Pakistan always stood by its brotherly neighbour Afghanistan in all hard times.

He said the main purpose of this event was to promote peace, love and harmony. The Pushtu singer Zeek Afridi, Shaukat Mehmood and KhalidMalik also performed and expressed solidarity with Afghan refugees through their music.

Ambassador of Brazil Claudio Raja Gabaglia Lins appreciated the generosity and hospitality of the government of Pakistan in playing host to the millions of Afghan refugees.