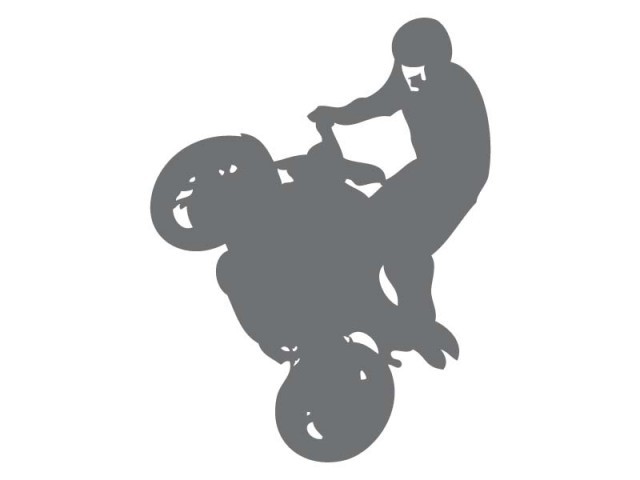 FAISALABAD : The increasing trend of one-wheeling and bike-racing continues on busy roads of Faisalabad District, creating troubles for traffic.

The practice of one-wheeling has been in operation for the last several years in the district, especially on national holidays. Recent years have seen an alarming rise in this dangerous trend among the youth in Pakistan.

A number of youngsters can be seen resorting to wheeling and bike-stunts on various roads in Faisalabad, particularly at D-Ground of Peoples Colony, Canal Road, Iqbal Road, University Road, Kotwali Road, Circular Road etc, posing a risk to their lives and others.

These daredevils are often seen driving their motorcycles during the day and night on the back wheel, juggling while doing so and performing other dangerous stunts like lying flat on the seat of a moving bike, driving inversely and doing other dangerous tricks. 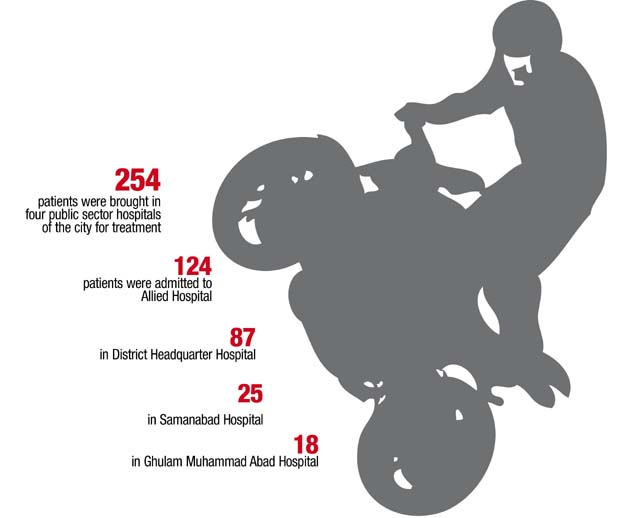 Most of these motorcycles run without silencers and the bikers make sure to give their bikes a complete make-over so that they have dazzling headlights, awkward designs without mudguards and fuel tanks adorned in different colours.

Driving has become difficult in the presence of bikers, who resort to dangerous stunts on busy roads despite the ban on the practice by the Punjab government. However, the police have miserably failed to curb this fatal practice in the district which has claimed several lives in the past.

While speaking to The Express Tribune, Deputy Superintendent of Police (DSP) Traffic Mumtaz Seharia said, “It is a very serious issue and several accidents have occurred owing to one-wheeling.” She said, “We try our best to curb this practice and also adopt counter measures but youngsters do not refrain and get involved in this menace.”

The DSP pointed out, “We need the cooperation of the society, especially parents to eliminate this tendency,”

When contacted, University of Agriculture, Faisalabad Pro-Vice-Chancellor Dr Muhammad Iqbal Zafar said, “The trend of one-wheeling is a serious social issue, indicating frustration among the youth and lack of opportunities to show their mettle.”

He added, “There is a need to take certain measures to overcome this increasing trend of one-wheeling that has caused a number of deaths and injuries to the youth and made them disabled for the rest of their lives.”

“All such youngsters have psychological and sociological issues and need comprehensive therapy,” he maintained.

The pro-vice-chancellor pointed out that the planners should advise the government to develop a chain of tracks in a bid to prevent one-wheeling on busy roads.

“We should also encourage youngsters to use good quality stunt bikes which would certainly help in reducing accidents to a great extent,” Zafar said.

He elaborated, “One-wheeling is not a talent. However, proper training is needed before performing stunts.”

Meanwhile, Punjab Medical College University Dean Dr Akmal Hussain told The Express Tribune, “One-wheeling is a dangerous practice and it also causes head injuries as majority of the youngsters do not wear helmets. Such injuries also lead to mental disability.”

He revealed, “I have handled more than 200 cases in my professional career in which youths with head injuries could not fully recover due to deep wounds.”

“Such injuries could not be repaired and cured by surgery as it is a complicated task and minimise the chances of survival,” he remarked.

Recently on the eve of Independence Day, at least 254 wheelie-doers suffered critical injuries and were admitted to four public sector hospitals of the city for treatment. Of them, the condition of several youngsters was stated to be serious as they received multiple injuries, including head wounds.

The hospital sources revealed that 124 patients were admitted to the Allied Hospital, 87 to District Headquarter Hospital, 25 to Samanabad Hospital and 18 injured were brought to Ghulam Muhammad Abad Hospital.

However, the number of those injured was far higher than reported as several youngsters were also admitted to private hospital and clinics for treatment.

Wheelie-doer Muhammad Ajmal told The Express Tribune, “Although one-wheeling is a dangerous sport, but I feel there is no harm in it on special occasions, like Eid, Independence Day etc.” He said, “While performing stunts, we monitor the positions and response timings of the traffic police. Although, there are policemen on the roads, especially on D-Ground but we are able to find enough space for our stunts.”

“This is a just a game and we feel pleasure in it. One must take a chance of this type of adventure,” Ajmal maintained.

When contacted, Traffic Police Spokesman Muhammad Ismail told The Express Tribune that on August 14, at least 110 cases were registered against wheelie-doers in various parts of the city and they were arrested. He added over 1,121 vehicles were impounded on charges of rash driving and those driving vehicles without licences.