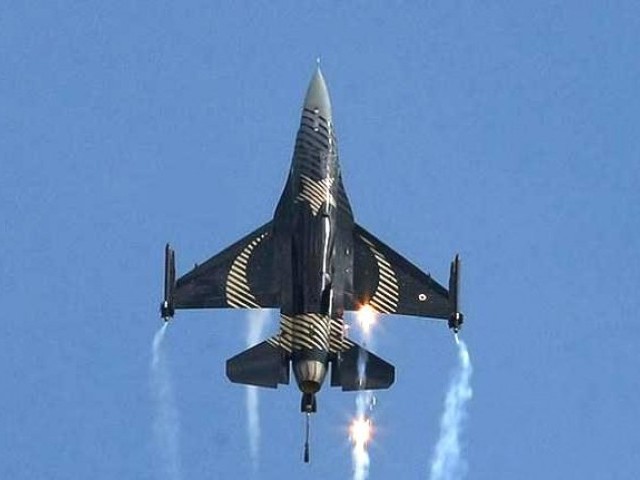 ISLAMABAD: Aerobatic teams from Turkey and Saudi Arabia will be performing in the biggest show by the Pakistan Air Force (PAF) in the country’s history to mark its 70th anniversary on Monday.

The special appearance of “Solo Turk”, the famous Turkish aerobatic team of the Turkish Air Force and the internationally acclaimed “Saudi Hawks” of the Royal Saudi Air Force alongside PAF aircraft will add colours to the mega event.

The members of the two teams in a media interaction on Sunday at the Air Headquarters in Islamabad expressed their happiness to be part of Pakistan’s Independence Day celebrations.

“We will hold a demo flight in order to show infinite brotherhood between Turkish and Pakistani nations,” Emrah Bayri, the First Lieutenant of Turkish Air Force, told reporters.

He said the Solo Turk team comprised of two pilots – Captain Erhan Gunar and Captain Serdar Dogan, who would fly the demo aircraft in sequence, supported by 11 personnel.

“During the show, a Solo Turk pilot will put the aircraft to limits of plus 9 Gs to negative 3 Gs by the support of a very powerful engine of F-16C,” Bayri added.

“Flares dispensed by the aircraft will enhance the visualisation of the demo accompanied by smoke-winders at its each tip.”

He said it would be his team’s effort to put a better show on the stage for the spectators.

“All the maneuvers are improved by our pilots, who have high standard of education. The whole show has been developed without support of any other demo team. Surely, we can say this is belonging to our nation,” he remarked.

Col Mousa Al, who is heading the internationally acclaimed, “Saudi Hawks” of Royal Saudi Air Force said, “We feel honoured and happy to be here to take part in Pakistan’s Independence Day celebrations.”

He added that his team comprised of six pilots.

Besides the two teams from the two countries, JF-17 Thunder, “the pride of Pakistan”, will also be performing in the air show. Another salient feature of the show is the Tri-Services free fall display of Special Services personnel. Mirage, SAAB-2000, and Augusta-139 from PAF, while MI-17 and PUMA helicopters from Army Aviation would also perform during the show in Islamabad at 1 pm, whereas, F-16, PAF aerobatics team Sherdil, P-3C Orion, Z-9, Alouette-III and Sea King helicopters would mesmerise the audience at Sea View, Karachi at 2:30 pm on August, 14.

Nawaz had undertaken to accept SC verdict in Panamagate case