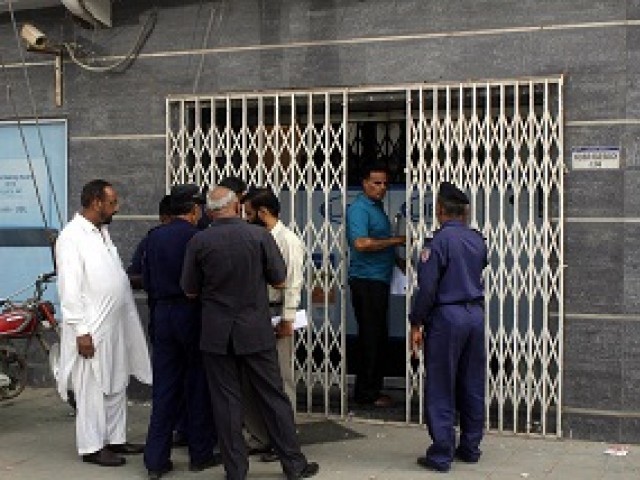 Swift operation: The robbers, clad in shalwar kameez, only took one and a half minute to complete the bank heist. PHOTO: MOHAMMAD NOMAN

KARACHI: A manager of the United Bank Limited (UBL) was shot dead in a bid to foil a bank robbery within the limits of the Ferozabad police station Tuesday afternoon. The robbers, however, managed to flee the scene after looting the bank.

A gang of robbers comprising at least four people entered a branch of UBL located near Noorani Kebab House. They first held the security guard hostage at gunpoint and later the bank staff and customers were held hostage. The robbers killed the bank manager and managed to loot Rs600,000 from the cash counter before fleeing the scene.

Robbers escape with Rs1.2m from bank

The deceased was identified as Abdul Rahim Motiwala, 40. He was shot once in his head and died on the spot. His body was taken to Jinnah Postgraduate Medical Centre for an autopsy.

An extra contingent of law enforcers reached the site and collected evidence. Police said the incident occurred when the robbers were offered resistance during the robbery bid. “The bank manager was outside the bank when the robbers were fleeing after looting cash from the bank,” explained Jamshed division SP Dr Muhammad Rizwan.

“As the manager had seen the robbers while entering the bank, he continued to offer resistance from outside,” Rizwan said.

Police claim to have solved Kharadar bank robbery within 24 hours

The robbers were clad in shalwar kameez and had arrived in a Suzuki pickup. They took only one and a half minute to complete their swift operation. However, they did not take the closed-circuit television (CCTV) cameras installed at the bank with them.

Police have obtained the CCTV footage from the bank and a search for the robbers is under way. “They [the robbers] escaped towards Khudadad Colony,” Rizwan said, adding that police is trying to trace the robbers with help of footage from cameras installed at the routes which the robbers used to escape.

The deceased was a resident of Federal B Area and a father of three children. His body was later handed over to the family. A case was registered against unidentified persons while further investigation is under way.