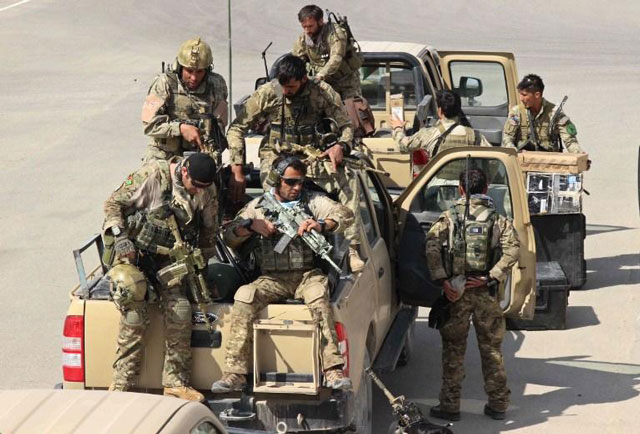 KABUL: A Taliban suicide bomber attacked a convoy of foreign forces in Afghanistan late Thursday, killing one NATO soldier and wounding six other personnel, in the latest blow to the international coalition in the war-torn country.

The deadly attack near Bagram Airbase comes at the peak of the Taliban summer fighting season and just a day after the insurgent group killed two US soldiers in the restive southern province of Kandahar. “One Resolute Support Soldier was killed and six personnel (five troops and one interpreter) were wounded Thursday evening when their patrol was attacked by a suicide bomber,” Nato said in a statement referring to the name of its Afghan mission.

“The patrol was conducting a partnered mission with the Afghan National Army when a personnel-borne IED (improvised explosive device) detonated,” in Qarabagh district in Kabul province. “The RS personnel who were wounded are being treated at the US military hospital at Bagram Airfield. All of the wounded are listed in stable condition,” it added.

The nationality of the dead soldier and injured was not immediately known but Qarabagh district is located near Bagram Airbase, the largest American base in Afghanistan, around 50 kilometres north of the capital Kabul. The Taliban quickly claimed the attack on social media and in Whatsapp messages to journalists. Civilians were also reported to have been wounded in the nighttime attack.

“#Afghanistan explosion in Qarabagh district, 12 wounded brought to our #Kabul hospital so far,” tweeted an Italian-run hospital in the capital which specialises in dealing with victims of bombings. The attack came after two US soldiers died on Wednesday when a Taliban suicide bomber rammed a vehicle filled with explosives into a convoy of foreign forces in the big poppy-growing region of Kandahar.

NATO forces ended their more than a decade-long combat mission in Afghanistan at the end of 2014. Since then Afghan troops and police, beset by soaring casualties, have struggled to beat back the resurgent Taliban, while facing the growing menace of the Islamic State group.

The Taliban have been ramping up their campaign against beleaguered government forces, underscoring rising insecurity in the country during the summer fighting season, when the warmer weather tends to spur an increase in militant attacks. Early last month a US soldier was killed and two others wounded in an attack in Kandahar’s neighbouring Helmand province while conducting operations against the Taliban.

Father of Afghan robotics girl killed in mosque attack
The attacks come as United States President Donald Trump weighs sending more American troops to Afghanistan nearly 16 years after the US invasion to topple the Taliban regime. US troops in Afghanistan now number about 8,400, and there are another 5,000 from NATO allies, a far cry from the US presence of more than 100,000 six years ago.

They mainly serve as trainers and advisers. American military commanders in Afghanistan have requested thousands of extra boots on the ground and Defense Secretary Jim Mattis is believed to be close to presenting a new US military strategy for Afghanistan to Trump.