The $100 the so-called superf­ight is likely to cost can be better spent else where
By Zohaib Ahmed
Published: August 3, 2017
Tweet Email 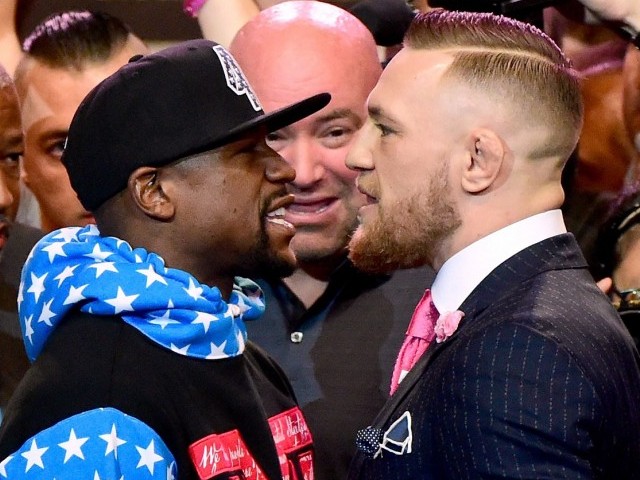 FAIR WARNING: While May-Mac bout does sound tempting, be advised that being invested in the spectacle and having designs on its PPV may not be in your best interests. PHOTO: AFP

There are many who would argue that this year’s biggest sporting event will be the Floyd Mayweather versus Connor McGregor superfight.

The best of boxing meets the best of mixed martial arts (MMA). What more could a combat sport fan want? Add the two contestants’ penchant for expletives and their unmatched ability to sell fights, and this appears to be a must-watch, must-buy pay-per-view (PPV).

While that does sound tempting, be advised that being invested in the May-Mac spectacle and having designs on the PPV may not be in your best interests.

General consensus is that Mayweather will win by a landslide, but there are a few who do feel McGregor has more than a puncher’s chance. What is almost certain though is the pair walking out of the ring with more than $100m each. MMA is a tough sport. Just recently UFC light heavyweight standout Anthony “Rumble” Johnson quit the sport citing concerns for his long-term health.

And four years after living on welfare checks, McGregor, on August 27 will have more money than he could ever have dreamed of. At what point does he decide that staying in a sport that could have long-term debilitating impact on his health — and that too for a couple millions bucks — is not worth the risk?

The $100m he is likely to earn — if the fans do buy this PPV in great numbers — may well bring forward McGregor’s retirement plans, depriving MMA and its fans off their sport’s most prized fighter.

The recent Anthony Joshua-Wladimir Klitschko fight, one of the best boxing matches in years and a world title affair, sold at a modest £19.95 on PPV, which roughly equates to $26.

In contrast, the price set for TV audience for the May-Mac bout is a staggering $99.95 — considerably more than the $59 benchmark for major boxing or UFC cards. For a fight that is a mismatch on paper and doesn’t have any titles on the line, the cost is too steep.

The one and only reason this fight is taking place is because it makes sense financially and will make two incredibly rich men even richer. That’s it. The boxing-MMA USP is just a smokescreen, the battle of skills a moot point. The only thing the May-Mac fight contributes to is the two fighters’ retirement funds. Hence, boxing fans willing to part with $100 of their hard-earned cash are practically paying for the said duo’s future spending on some more mansions, some more flashy cars. As mentioned above, there is nothing on the line as far as the two sports are concerned.

On July 29, UFC light heavyweight stars Daniel “DC” Cormier and former champ Jon Jones fought for a second time in one of the biggest grudge matches in combat sports history.

Mayweather-McGregor to box on August 26

These mouth-watering fights have been years in the making and pit the best in the business against each other. Yet they have been overshadowed by what can be described as a freak show of a fight.

Combat sport pressers are no place for feelings, manners or good behaviour. It has always been like that and arguably should remain so. After all, two men who’re supposed to smash each other’s faces can’t be expected to say nice things about each other before doing the deed.

But while foul-mouthed tirades are okay, racist, sexist and xenophobic remarks are not. Some would argue a one-off indulgence in the red zone, if it occurs naturally and in the heat of the moment, can be ignored, if not condoned. But two guys practically reading out scripts and roasting the other a la WWE, dropping all kinds of unsavoury, racially-motivated comments — with other’s approval — just to make the headlines is taking it too far.

The Money fight: Mayweather, McGregor presser works like a charm

Before, it was two fighters venting their genuine dislike for each other. Now, through the pre-planned