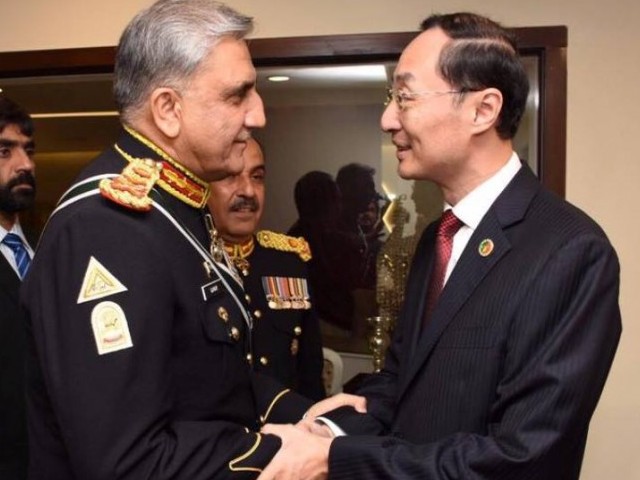 “Pak-China military-to-military cooperation is pillar of our bilateral relationship,” said Chinese envoy while addressing at a reception to mark the 90th anniversary of the People’s Liberation Army (PLA) in Islamabad.

While felicitating the people of China and their leadership, Army chief General Qamar Javed Bajwa said the two neighbouring countries’ relationship “finds no parallel in the world”.

“Pak-China enviable relationship finds no parallel in the world,” the chief of army staff (COAS) was cited by the military’s media wing as saying.

"Pak-China enviable relationship finds no parallel in the World", COAS. (2 of 2). pic.twitter.com/IJu8cIQbns

Speaking at the PLA founding day anniversary, the army chief said: “This day symbolises the power of people’s unity, unflinching resolve and sacrifices, owing to which PLA, today, is one of the finest military outfits in the world.”

China has always provided unconditional support to Pakistan’s efforts for reconciliation in Afghanistan, especially at the platform of Quadrilateral Coordination Group (QCG), he added.

Focusing on support of the all-weather friend, Gen Qamar said: “Pakistan is indebted to China for its unflinching support to our perspective at all international forums, may it be expansion of Nuclear Suppliers Group, Kashmir issue, or Pakistan’s full membership of Shanghai Cooperation Organisation.”

Islamabad and Beijing are facing similar challenges and opportunities, he said, adding that the two nations have assumed shared responsibility towards stability in the region and prosperity of people. “We are also actively cooperating in all fields against war on terror.”

Praising the professionalism of People’s Liberation Army, the COAS said the professional standards of PLA, its training, technological outreach and its enviable operational record “stand second to none”.

This close collaboration, Gen Qamar said, spans over a wider canvas than ever before and ranges across strategic initiatives like China-Pakistan Economic Corridor (CPEC), defence collaboration in numerous joint projects and united diplomatic front, internationally.

“The professional collaboration between PLA and Pakistan Army will continue to expand to bring peace  the region in general and China and Pakistan in particular.” he added.