No room at the inn for India's 'sacred' cows

No room at the inn for India's 'sacred' cows 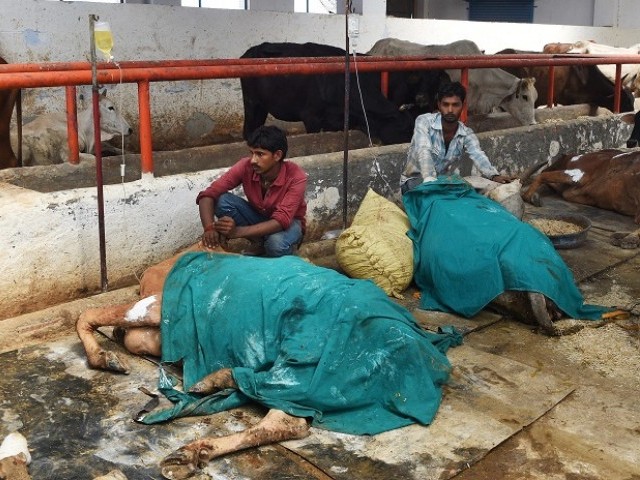 Employees give medical care to sick cows at an animal hospital at the 'Sri Krishna Gaushala' (cow shelter) in Bawana, a suburb of the Indian capital New Delhi. PHOTO: AFP

BAWANA, INDIA: Revered by most Indians, cows are at the centre of political battles and ‘lynch mob’ attacks, but they are being abandoned in growing numbers and turned away by shelters that cannot cope.

The Sri Krishna Gaushala on the outskirts of New Delhi is typical of shelters for homeless cows across India – struggling to keep up with demand. Authorities in Uttar Pradesh and Haryana states are thinking of building cow shelters in prisons.

At one Uttar Pradesh shelter, scores of cows are reported to have died from hunger in recent weeks. Sri Krishna is spread over 38 acres and is home to nearly 8,000 cows, bulls and calves – mostly ageing, ailing, and no longer producing milk. 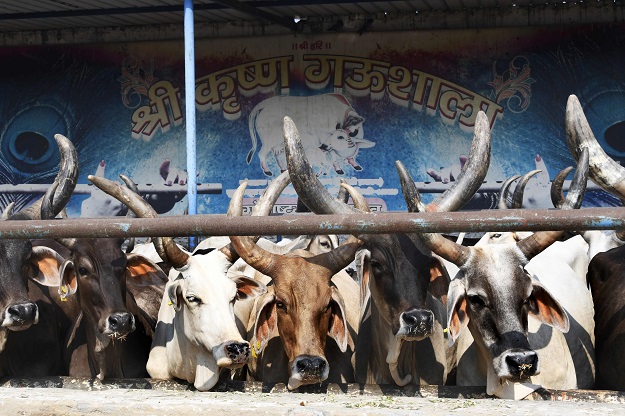 Cows look on at the ‘Sri Krishna Gaushala’ (cow shelter) in Bawana, a suburb of the Indian capital New Delhi. PHOTO: AFP

Rajendra Singh Shekhawat manages 110 bustling sheds where cows are fed, treated and even massaged after being rescued, bought from cash-strapped farmers, or donated. The shelter is close to its 7,800 capacity. “We have 7,700 right now. All the other cow shelters in Delhi are facing the same problem, they’re all overcrowded,” Shekhawat told AFP.

Cows are worshipped as a mother figure by Hindus who make up more than 900 million of the country’s 1.3 billion population. Some people consider cows a one-stop-shop for their dairy and medical needs. Many believe that drinking cow urine can cure everything from arthritis and asthma to cancer and diabetes.

“The cow isn’t an animal, it isn’t an ordinary living thing. She is our mother and her place should be at a home,” 55-year-old Shekhawat told AFP as a veterinarian hooked up intravenous drips to one ailing animal. 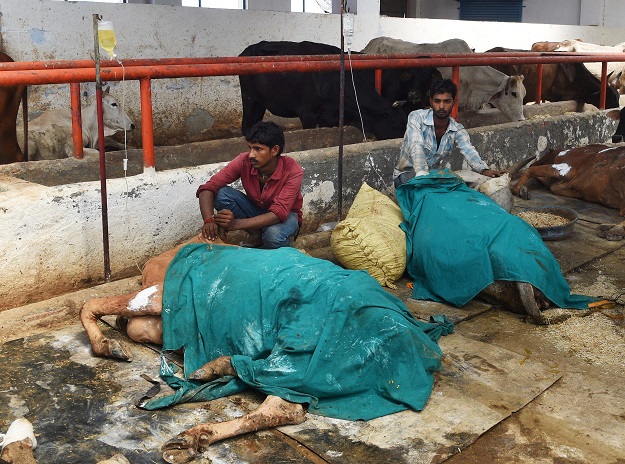 Indian employees give medical care to sick cows at an animal hospital at the ‘Sri Krishna Gaushala’ (cow shelter) in Bawana, a suburb of the Indian capital New Delhi. PHOTO: AFP

But a 2012 livestock census found there were more than five million strays across India and more than 12,000 in Delhi. Cows hold up city traffic and graze on plastic bags, used sanitary napkins and corroded batteries on garbage dumps. One had to be rescued in Delhi last week after falling down a rain drain.

Courts have repeatedly ordered authorities to take action because of the safety and public health risk. But since Hindu nationalist Prime Minister Narendra Modi’s right-wing Bharatiya Janata Party stormed to power in 2014, cows have won a near-VIP status. Rumours of cows being taken for slaughter can spark murderous reprisals and religious riots.

The government tried to impose a nationwide ban on the sale of cattle for slaughter, triggering an outcry among Muslims and other minorities who eat beef.

The ban was suspended by the Supreme Court this month.

Every month, some 600 cattle are rounded up in Delhi and relocated to five shelters. “Three of the five are packed. Currently we’re deporting strays to the nearest less-crowded shelter,” Jitendra Kumar Gaur, director of Delhi’s animal husbandry department, told AFP.

Gaur said improved technology and health measures like vaccinations and deworming have boosted cows’ lifespan. But he also blames “the commercial mindset of farmers” who only keep cows while they provide milk. “This is the first time we are facing this ‘overcrowding’ problem and the menace is mainly created by those who abandon their cattle.” 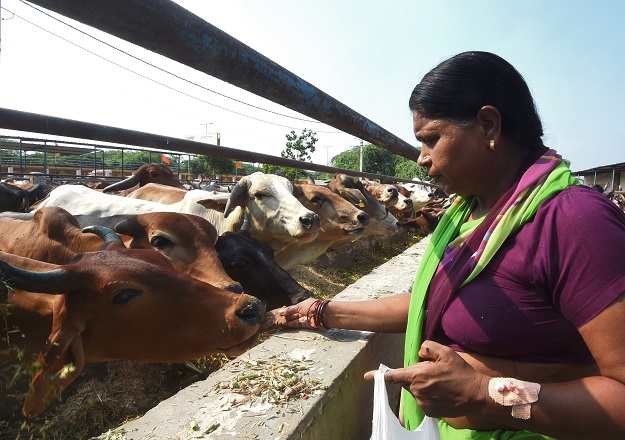 A woman feeds cows at the ‘Sri Krishna’ cow shelter in Bawana, a suburb of the Indian capital New Delhi. PHOTO: AFP

Every day, the five shelters receive $0.62 per animal from the government. Shekhawat says he spends more than $1.55 for each cow. Supporters of the shelter donate thousands of dollars each year to keep it going.

But space is also a problem.

Delhi does not have spare land, said Gaur, whose department wants to put a microchip in every bovine to help track and identify animals and their owners. “We have long-term solutions. We won’t let this problem get out of hand,” he vowed.

Shekhawat maintains that the best way to lower the number of strays is for Indians to go back to their rural roots and “take care of cows at home”.

With stray numbers rising, it is tough for Delhi residents to look after a cow in a city where the population is shooting toward 20 million. And the problem is not limited to Delhi, according to animal rights activist Rima Anand, highlighting shelters bursting at the seams across India.

“There is a change in attitude towards cows thanks to this government. It has prioritised cow welfare,” Anand, of the Delhi-based Dhyan Foundation that rescues and protects animals, told AFP. “Shelters are full across the country,” said Anand. But this, she maintained, was better than seeing the animals slaughtered illegally.